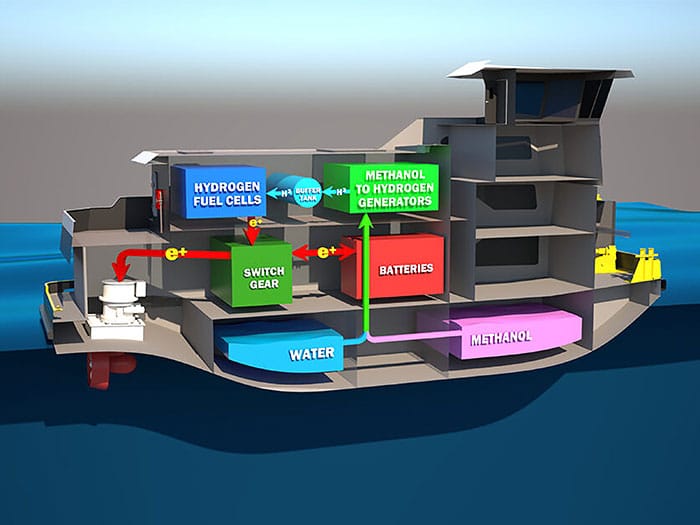 The technology that’s key to the the Hydrogen One towboat project has received Approval in Principle from classification society Lloyd’s Register.

That technology — e1 Marine’s methanol to hydrogen generator — allows fuel cell-grade hydrogen to br safely and cost-effectively generated on board a vessel from methanol and water.

According to e1 Marine, the AIP will act as a spring board for enabling the demonstration of the generator across different maritime sectors from ports and towboats to offshore and deepsea vessels.

“The maritime industry faces a once in a generation challenge in managing the way it utilizes energy for propulsion as part of the global energy transition to net zero carbon,” said Robert Schluter, managing director at e1 Marine. “Using e1 Marine’s technology, with methanol providing a safe and effective carrying medium for hydrogen, enables the adoption of clean zero emission fuel cell power solutions. With the M-series methanol to hydrogen generator, we are making hydrogen a viable fuel option for the maritime industry for vastly different applications.”

E1 Marine is equally owned by technology company Element 1 Corp, Irish-based product and chemical tanker operator Ardmore Shipping Corporation and Metairie, La., based Maritime Partners, which, with a fleet of over 1,600 inland waterways vessels is the largest lessor of marine equipment in the United States.