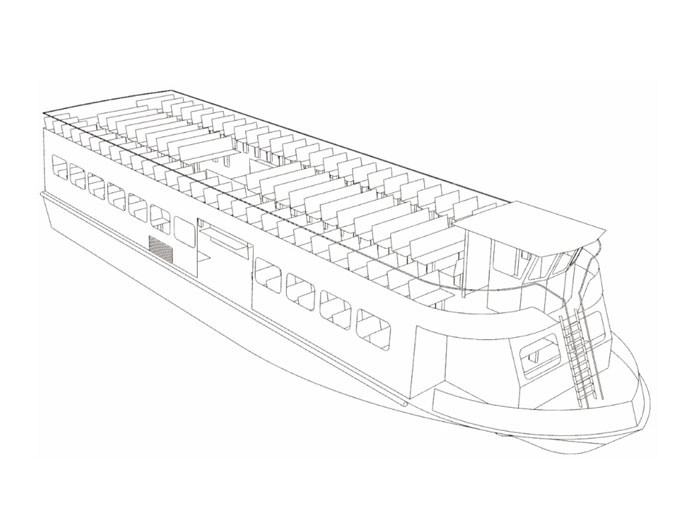 Rendering of the new 400-passenger ferry for Sayville Ferry Service

“We’re thrilled to be working with them,” says Greg Beers, President, BHGI. “This is our first project with them.”

Designed to comply with 46 CFR Subchapter K, the 400-passenger ferry will also have the ability to carry cargo on its run between Sayville, Long Island, and Fire Island. The new design is based on an existing parent vessel.

“This will be a real people mover,” Ken Stein, President, Sayville Ferry, tells Marine Log. Stein emphasizes that the new ferry won’t be built for another three to five years. “We want to avoid any frustration and have our plans fully developed and Coast Guard approved and ready, before we go out to shipyards for bids,” he says.

Stein says the new boat will have space for luggage, and be roomier and more comfortable for passengers than the existing parent vessel. Additionally, the new ferry will have a 20+ knot speed, with improved fuel efficiency and reliability. The boast will have a shallow draft of between 3-1/2 and 4 feet. Stein says the new boat will also enable Sayville Ferry to operate a 100% capacity, even when one of the current fleet of seven boats is down.

The Sayville Ferry has been providing ferry service between Sayville and Fire Island since 1894. Thousands of tourists travel to Fire Island, a barrier island off the southern coast of Long Island, every during the summer beach season.

BHGI is providing both preliminary and detail design packages for all aspects of naval architecture and marine engineering. There is particular emphasis on modernization of the propulsion plant, improvements for passenger embarkation/debarkation and cargo handling, hydrodynamic enhancements, and vibration reduction.