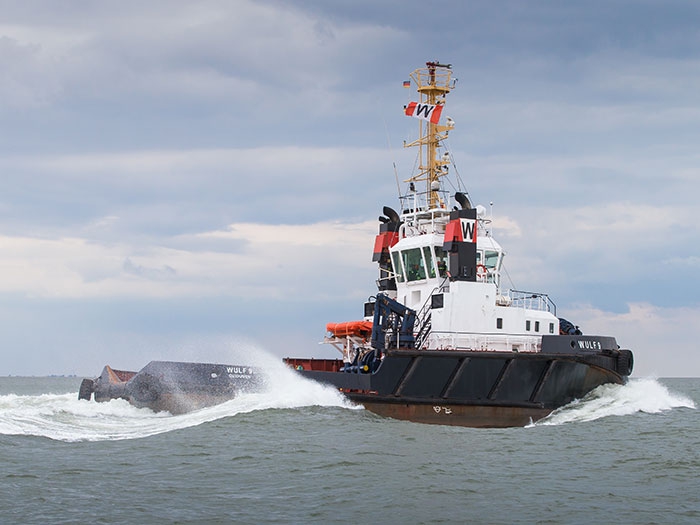 Schottel GmbH has successfully carried out a control upgrade on the seagoing and harbor tug Wulf 9, equipped with azimuth thrusters from another supplier

NOVEMBER 28, 2018 — Schottel GmbH has successfully carried out a control upgrade on a 1988-built tug equipped with azimuth thrusters from another supplier. Instead of replacing the entire propulsion system (including mechanics and hydraulics), only the obsolete controls were swapped out.

The Wulf 9, built at Norwegian shipbuilder Båtservice Verft A/S in 1988, is one of five tugs in the Otto Wulf GmbH & Co KG fleet. With a bollard pull of 54 tons, the 33.3 m long and 10.0 m wide tug offers a broad range of services – such as harbor and deepsea towage, salvage, tugboat and pontoon chartering as well as sea transportation of heavy goods.

However, in order to comply with the latest class requirements, the owner was forced to modernize the 30-year-old ASD tugboat. Since the required spare parts were obsolete, an alternative had to be found.

“Instead of offering intensive and expensive complete rebuilds, Schottel proved convincing with a customized solution,” says owner Andreas Wulf. “In addition to the comparatively low conversion costs and the short downtime, it was above all the cooperative partnership and the regional proximity between our location and the Schottel production site in Northern Germany that proved decisive. Within two weeks, the lifecycle of the vessel’s electric components was extended by up to twenty years – always safe in the knowledge that Schottel, as an OEM, is able to equip the Wulf 9 for the next decades.”

The Schottel solution ensures that it will be possible use the Wulf 9 reliably in future. As replacement of the obsolete electronics could be carried out by a local electronics company, it was possible to significantly reduce costs. Thanks to the lower expense for installation, the conversion time and thus the downtime could be greatly shortened. Another major advantage is the long-term availability of spare parts, which Schottel ensures for the coming decades – thus reducing the off-hire risk significantly.

Along with the new control units, the tug was also given new driving modes. These modes enable the tug owner to optimize the vessel’s operation. This allows operations to be performed more efficiently and comfortably.