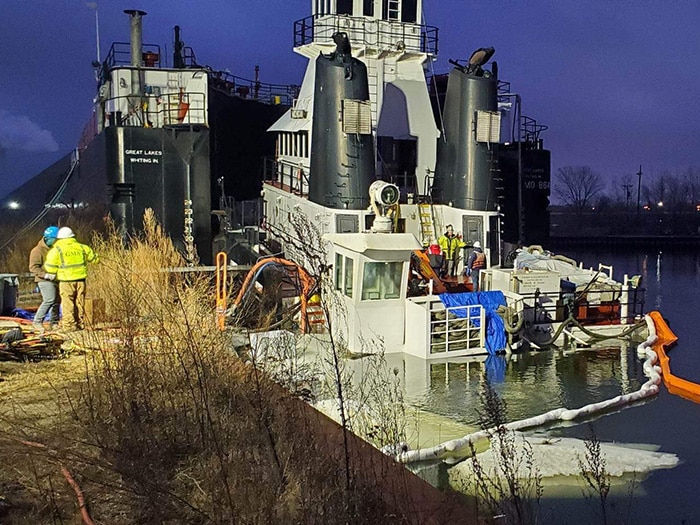 As of yesterday, U.S Coast Guard Sector Lake Michigan and its partners were still working to refloat and limit potential impacts from a towing vessel that sank at its moorings in the Kinnickinnic River in Milwaukee, earlier this week.

At 11.27 a.m., January 2, watchstanders at Coast Guard Sector Lake Michigan were notified by the National Response Center that the towing vessel Michigan had begun taking on water at its moorings and had partially sank in 26 feet of water.

Michigan is the tug unit of an ATB and is paired with the tug Great Lakes. USCG imagery and local TV footage seems to show that the ATB tug was still in the notch when the incident occurred.

WISN 12 News reports that the tug and barge were berthed at their location for the winter.

Originally named Amoco Michigan, the tug was constructed in 1982 as a tugboat by Bay Shipbuilding at Sturgeon Bay, Wis. for Amoco Oil Company of Indiana. She was paired with the barge Amoco Great Lakes after completion, which was built by the same shipyard. According to the Great Lakes Ships website, the pair were not originally an articulated tug-barge unit, but rather lashed together using a cable and winch system. However, in 2015 the pair were retrofitted with an Articouple ATB coupler at Bay Shipbuilding.

Coast Guard pollution responders confirmed that the vessel is not actively polluting and 100 feet of hard boom with absorbent material have been deployed as a preventative measure.

The Michigan had a maximum potential of 40,000 gallons of oil and fuel onboard, but Capt. Seth Parker, Commander of Sector Lake Michigan told WISN 12 that the amount believed to actually be onboard at the time of the sinking was some 14,000 gallons.

“At this point in time, the Coast Guard’s focus is the marine environmental protection and the potential waterway impacts,” said Capt. Parker.

The vessel’s owner, U.S. Venture, has activated its vessel response plan and contracted a marine salvage organization to respond to the sunken vessel.