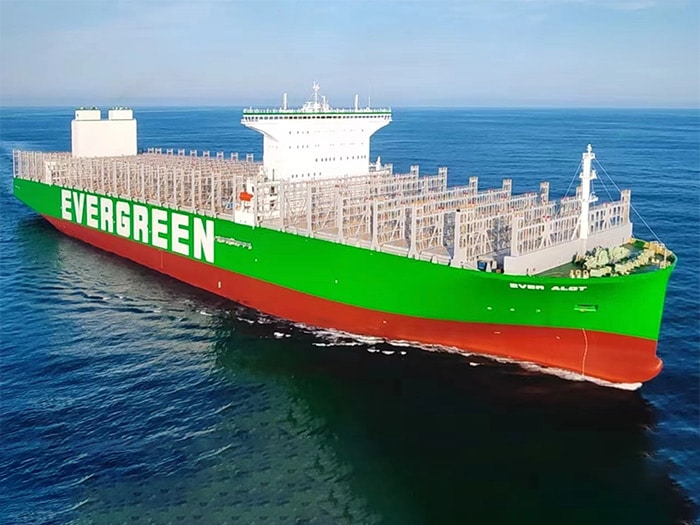 There’s a new holder of “the world’s largest containership” title and it’s another Evergreen Marine Corporation giant, the 24,000 TEU Ever Alot,

Delivered Wednesday by China’s Hudong-Zhonghua Shipbuilding (Group) Co Ltd, it measures 399.99 meters in length and 61.5 meters in width. It is the first of four new A-Class box ships set to join the Evergreen fleet from the shipyard.

While cynics may be pondering how many tugs and dredges it would take to move the ship should it follow the example of Ever Given and Ever Forward and get stuck somewhere inconvenient, one thing Ever Alot required a lot of was paint. Which was good news for Nippon Paint Marine.

Nippon Paint Marine is supplying coating systems to all four of the 24,000 TEU A-Class sisterships being built at Hudong-Zonghua. Its extensive scope of supply includes its A-LF Sea antifouling system.

Commenting on the decision to apply the A-LF Sea system to the world’s largest containerships, Steven Chang, director of Nippon Paint Marine (Taiwan), said: “With systems and components capable of reducing the operational impact on the marine environment being a key design requirement, the low friction A-LF Sea 150 was considered the only system capable of contributing to the owner’s strict environmental sustainability goals.”

“The super-efficient copper-silyl-acrylate antifouling is proven to have good fuel savings effect, largely through the use of our patented hydrophilic hydrogel technology,” continued Chang. “This has been verified to reduce frictional resistance considerably, compared to other antifouling paints.”

In addition to A-LF Sea 150, Nippon Paint Marine supplied 20 different types of paint for multiple areas of the vessel. In addition to the antifouling system, the company also provided E-Marine anti-corrosion coatings for the hull, cargo holds and decks, and a NOA 60 HS system for the ships’ ballast tanks.