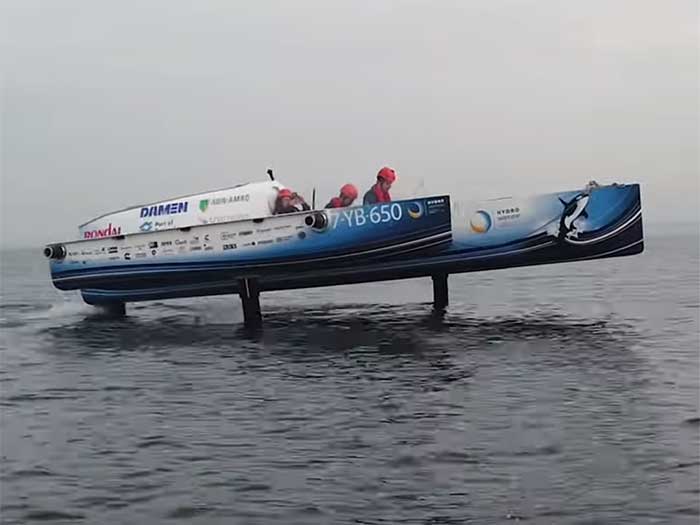 Boat gets up on hydrofoils at speed of 22 kilometers per hour.

A team of students at TU Delft in the Netherlands are getting set to compete at the upcoming eighth Monaco Energy Boat Challenge with what they call the “first flying hydrogen boat.” That’s flying as on hydrofoils.

The 20 students in the TU Delft Solar Boat Team have spent a year working on their project Hydro Motion. The result is a seaworthy boat, fully equipped with a hydrogen system and super strong hydrofoils. At a speed of 22 kilometers per hour, the hydrofoils make the boat, a trimaran weighing over 1,000 kilograms, fly above the water.

“We succeeded, we canRick Van Wilse say that with certainty. The entire boat has come out of the water,” says Rick van Wilsem, the project’s chief engineer.”We are proud to announce with the team that we have made the world’s first foiling hydrogen boat!”

In the Monaco event, electric and hydrogen powered boats will compete against each other in three parts; maneuverability, the sprint and the long-distance race, in which the TU Delft team has its eyes on the prize. Their boat has been optimized to take on this challenge: sailing for 6 hours straight on the open sea without refueling.

The boat the team has been working on this year is an over 8-meter-long trimaran, equipped with a complete hydrogen system anf smart electronics, all the components to propel the boat powerfully, and the strongest hydrofoils. The boat is operated by three pilots and reaches speeds of up to 40 kilometers per hour. Hydrogen gas is stored under high pressure in an on-board tank. A fuel cell combines this hydrogen with oxygen from the air to generate electricity. This powers the electric motor that turns the boat’s propeller.

More on all that HERE