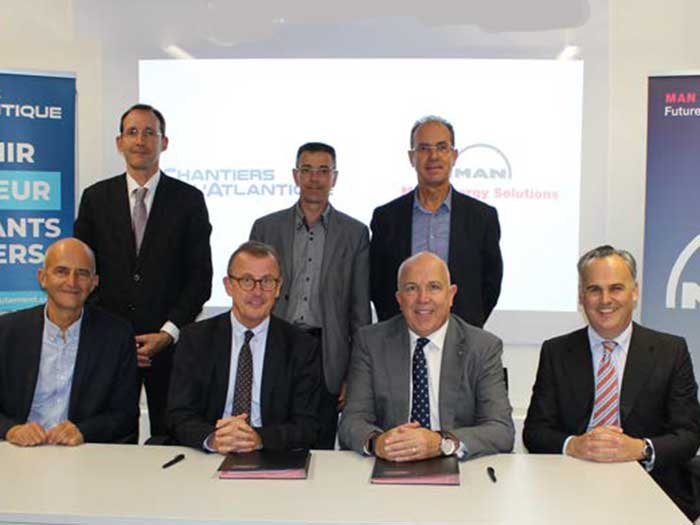 Four refueling tankers being built for the French Navy are to have MAN main engines. As part of the deal, MAN Energy Solutions will supply the Chantiers de l’Atlantique shipyard with a total of 16 engines for the four tankers or, more formally, Logistic Support Ships.

The tankers each have a fuel capacity of 13,000 cu.m with a mission to provide logistical support to French and allied navies’ combat vessels. They will carry fuel for vessels, jet fuel for aircraft, weapons and ammunition, spare parts, as well as food. They have been designed to support the aviation group attached to the aircraft carrier, Charles de Gaulle.

Each vessel will feature a diesel-electric propulsion system with two shaft lines and propellers. MAN’s scope of supply for each ship covers two MAN 12V32/44CR engines (each rated at 7,200kW) and two MAN 8L32/44CR engines (each rated at 4,800kW) resiliently mounted on baseframes. Delivery for the four newbuildings is scheduled between 2022 and 2029.

Wayne Jones OBE – Chief Sales Officer and Member of the Executive Board, MAN Energy Solutions – attended the signing ceremony in Saint-Nazaire and said: “This is a real stamp of approval for our company as this is a sizable contract with what is probably one of the most active navies in Europe. It is also very pleasing to work once again with Chantiers de l’Atlantique, one of Europe’s major shipyards. We thank both organizations for placing their trust in us and look forward to our continued fruitful relationship.”

The order is part of a Franco-Italian LSS Program led by OCCAR, the International Organization for Joint Armament Co-operation, on behalf of DGA, the French Armament General Directorate, and its Italian counterpart, NAVARM.