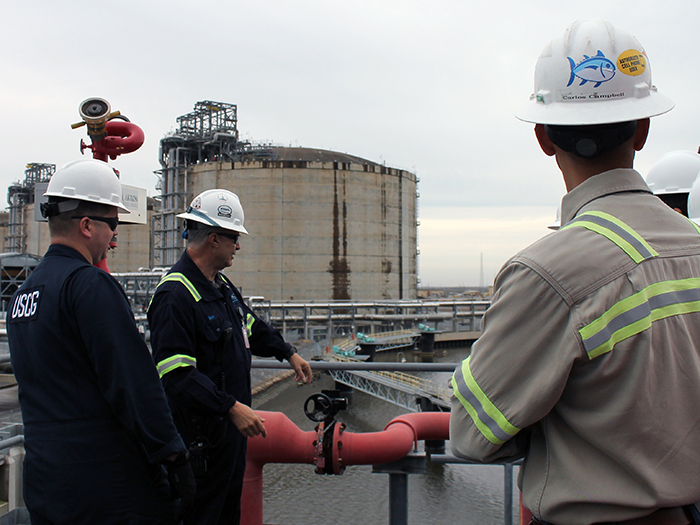 Coast Guard Marine Safety Unit Lake Charles personnel conducted a facility safety inspection at the Cameron Liquefied Natural Gas (LNG) facility near Cameron, La. on Feb. 12, 2019 in preparation for the facility to load its first LNG cargo for global export. The Coast Guard has regulatory jurisdiction in the Marine Transfer Area (MTA) for all waterfront facilities handling LNG in bulk quantities to or from a vessel. U.S. Coast Guard photo by MSU Lake Charles

Cameron LNG marks another milestone in the Gulf Coast’s emergence as global LNG export hub. Cheniere Energy has exported LNG from its Sabine Pass complex since 2016 and last year began shipping from a second complex near Corpus Christi. Several other projects are advancing.

The Coast Guard has regulatory jurisdiction in the Marine Transfer Area (MTA) for all waterfront facilities handling LNG in bulk quantities to or from a vessel.

“Facility safety inspections are a key part of the Coast Guard’s mission to facilitate safe and secure commerce on our nation’s marine transportation system,” said Lt. William Hickey, MSU Lake Charles’ Chief of Prevention. “Thanks to the transparent communication and diligent preparation by Cameron LNG, the inspection went smoothly, and we applaud Cameron LNG’s ongoing commitment to safety.”

Not all the news about Cameron is happy. McDermott International, Inc. (NYSE: MDR) which is in a 50/50 joint venture with Chiyoda Corporation to construct the project, yesterday said that, for the fourth quarter of 2018, it “expects to report an adverse change in estimate of approximately $168 million, due to unfavorable labor productivity, and increases in subcontract, commissioning and construction management costs.”

McDermott noted that it and Chiyoda “are fully aligned at the joint-venture level regarding the change in estimate.”

McDermott added that the Cameron LNG project “is a world-scale facility incorporating proven technology designed to produce nearly 14 million tons per year of liquefied natural gas. Operationally, the project is on track to reach a major milestone with feed gas into the facility later this quarter. Construction continues to progress well. The gas turbine solo run was completed ahead of schedule, cold circulation of hot oil in Train 1 was completed during the quarter and flare ignition testing was successfully completed on all flares. All of these are crucial steps in the commissioning of Train 1.