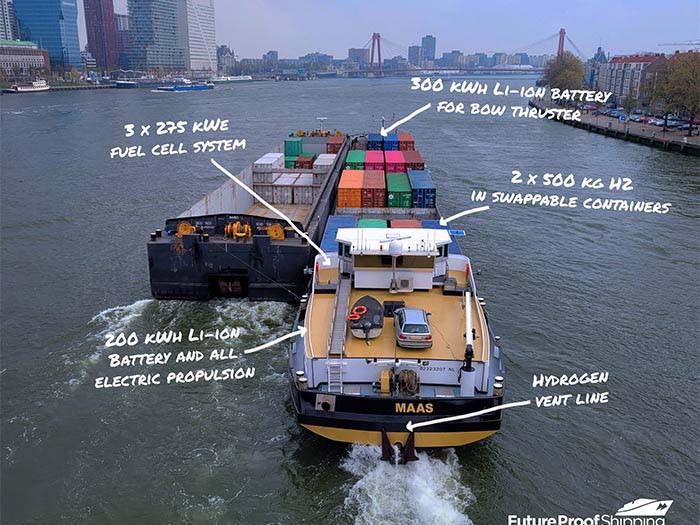 The Central Commission for the Navigation of the Rhine (CCNR) has recommended that the Maas receive an exemption from the Rhine Vessel Inspection Regulations (RVIR) to permitting the use of hydrogen as a fuel for propulsion and power supply on board the vessel.

Having completed a detailed Hazard Identification (HAZID) study with their classification society Lloyd’s Register (LR), the CCNR recommendation was the next target on FPS’s radar.

The recommendation states that the use of hydrogen as a fuel on board the Maas is considered to be sufficiently safe if a number of critical conditions such as risk assessments, crew training, bunkering and data recording, are met at all times.

“This landmark exemption will hopefully act as a catalyst to speed up the approval process and establish concrete rules dedicated to hydrogen fueled vessels, and ultimately clear the path to zero-emission shipping for all who are prepared to make the transition,” said Richard Klatten, CEO at Future Proof Shipping.

FPS can now move ahead with the advanced engineering plans for the Maas and soon they will be ready to submit documentation for the final stage of class approval from LR.

To receive a recommendation from the CCNR, first a risk analysis and design optimization study must be completed, with the help of a classification society. The FPS team has been working closely with Lloyd’s Register and the Dutch Ministry of Infrastructure who filed the application for the recommendation with the CCNR, on behalf of FPS.

In the absence of specific rules for the design approval of hydrogen fueled vessels, the “alternative design process”, by which the safety, reliability and dependability of the systems must be demonstrated to be equivalent to that achieved with comparable conventional systems, is currently the only means of approval for hydrogen vessels.

Once the retrofit of the Maas is completed later this year, the vessel will continue to ship container cargo between Rotterdam and Antwerp and is expected to reduce greenhouse gas emissions by 2000 CO2e tonnes annually.

The retrofitting involves replacing the current internal combustion technology with hydrogen technology, removing both the main engine and gearbox, and installing a new modular propulsion system. This will consist of electric motors, hydrogen tanks, a PEM fuel cell system (necessary for converting hydrogen into electricity) and a battery system. The compressed hydrogen tanks, the fuel cells and the battery system are separate units that can be removed for maintenance or replacement purposes.

The fuel cell system will be triple redundant with 825 kW capacity (to supply propulsion and auxiliary power) and a 504 kWh lithium-ion battery pack for peak shaving, secondary and bridging power. The system will contain a 750V DC bus bar and an e-motor for propulsion.