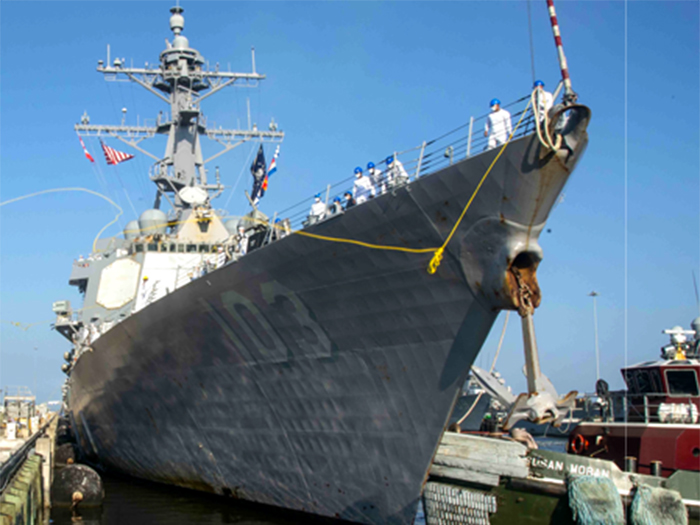 Only ship to be fitted with HED has been USS Truxton [U.S. Navy photograph]

A new report from the GAO (U.S. Government Accounting Office) looks at why, after spending over $100 million to develop, test, and produce hydraulic electric drive (HED) systems for its Flight IIA Arleigh Burke destroyers, the U.S. Navy has changed its plans. .

According to the GAO, “The HED system draws surplus power from the ship’s electric system and uses it to propel the ship. This allows the crew to turn off the propulsion engines and save fuel.”

Since initiating the HED program in 2011, the Navy has purchased six systems but has only installed one

In October 2018, the Navy completed installation of one of the systems on the USS Truxtun (DDG 103). However, the Navy has yet to install the remaining five HED systems and now plans to use them to support another research effort. referred to as Propulsion Derived Ship Service (PDSS). The Navy’s goal for PDSS is to develop an electric motor that can facilitate the movement of power to and from a ship’s electrical and propulsion systems, according to senior Navy officials. In contrast, the HED can only move power in one direction—from the electrical system to the propulsion system.

The GAO says “we could not assess the prudence of suspending the [HED] program because the Navy didn’t fully assess the costs and benefits or complete testing of the HED system before making its decision.”

The Navy stated that it did not include a summary of the planned investments in the report because the HED program was not included in the President’s fiscal year 2020 budget and also due to the need for additional HED data. However, Congress appropriated $35 million in funding for the HED program in 2020, which was available to support ship installation of the five previously purchased HEDs. The Navy stated that it can only use a small portion of this funding before it expires in September 2022 since the systems cannot be upgraded and incorporated into a ship’s maintenance schedule in the next threeyears.

Navy requirements officials identified several reasons for suspending the HED program, but these reasons differ from information GAO obtained during the course of this review. For example:

GAO says it did not assess the Navy’s decision to use the HED systems for PDSS research because the Navy did not have documentation regarding the requirements, testing, schedule, or costs of the PDSS effort. GAO could not determine the merits of suspending the HED program and using the other five HED systems for the PDSS effort because the Navy has yet to complete analysis that determines the costs, benefits, and performance necessary to support such a decision. If the Navy completes a further assessment—which has been requested by Congress—it could provide the information necessary to inform future decisions about the HED program.