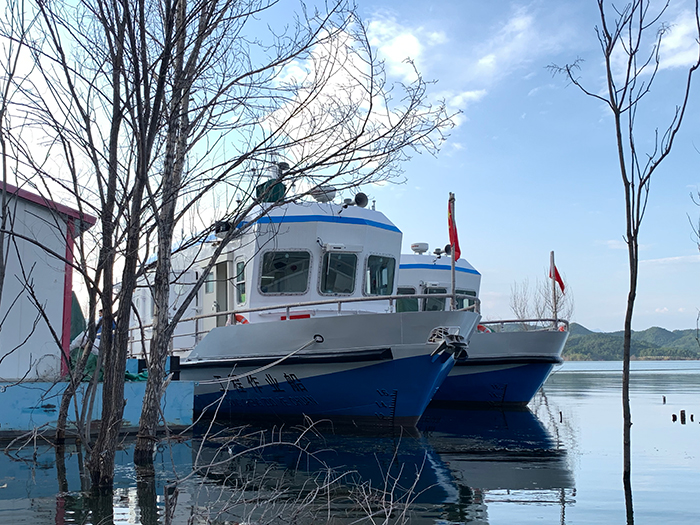 Two electric workboats carrying out water control testing and engineering duties on China’s Miyun Reservoir are the first emission-free vessels to operate on the 180-square mile artificial lake, which is Beijing’s primary source of clean water.

The Government of China commissioned the vessel as part of its initiative to reduce emissions from inland vessels.

In charge of developing the vessels, CSSC Guijang Shipyard and the CSSC Shanghai Marine Diesel Research Institute turned to Danfoss Editron to equip the two workboats with Editron marine systems.

The second workboat is a 78 foot long hybrid water quality monitoring vessel that undertakes daily and emergency water samples and sludge collection testing. The boat is powered by electric power only, giving it an operational range of 31 miles, though it is also equipped with a diesel generator as backup in case of emergencies.

Danfoss Editron’s drivetrains are half the size of conventional diesel-electric propulsion and power plant systems, making them, says the company, the most compact and efficient on the market today.

In addition to operational cost and emissions savings, switching to an electric solution has also resulted in noise and vibration reductions, enabling a smoother crossing for both crew and passengers.

A fully-electric ferry, the M/Y Beijing Number One Ferry, has recently been added to the fleet just a couple of months after the launch of the first two workboats. As the Government of China is introducing additional Green River Way and low-emission shipping initiatives, the demand for emission-free ships in China should increase in the near future.

“We were really pleased to cooperate with Danfoss Editron’s China team in the Chinese marine propulsion market,” said Duan Zheng, CSSC Shanghai Marine Diesel Engine Research Institute’s Chief Technical Officer. “The team has been excellent at providing professional support, both commercially and technically, throughout the project. It is an excellent global enterprise which has always delivered cutting-edge products to the market. We sincerely hope that together we can strengthen and extend our cooperation in the future.”