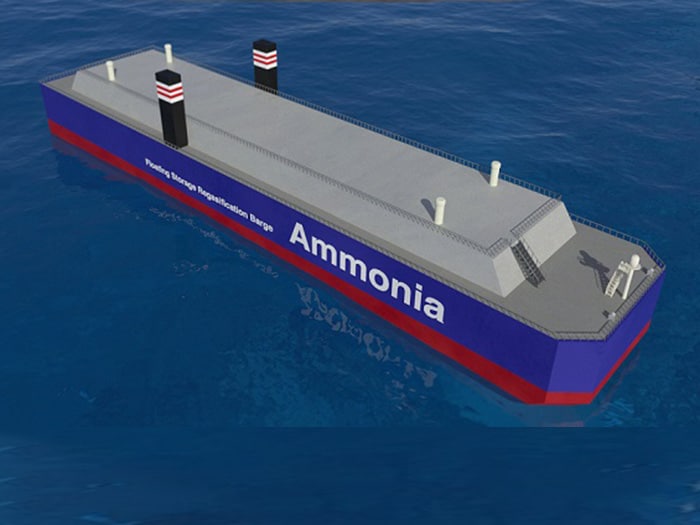 The ammonia A-FSRB is in many ways the ammonia equivalent of an LNG FSRU [Image; NYK Line]

It is not only ships that are potential users of ammonia as a fuel. In Japan, technological development is underway on ammonia fuel mixed combustion power generation at coal-fired power plants as a contribution to the reduction of CO2 emissions. Challenges when using ammonia in existing thermal power plants include securing land for new onshore facilities such as storage tanks and regasification facilities, and the large initial investment cost. One answer could be to mount those facilities on a barge.

The A-FSRB covered by the AiP is an offshore floating facility that can receive and store ammonia that has been transported via ship as a liquid, warm and regasify the ammonia according to demand, and then send it to a pipeline onshore.

According to its developers, the A-FSRB offers the advantages of shorter construction time and lower costs in comparison to the construction of onshore storage tanks and regasification plants. The A-FSRB is expected to speed up the adoption of fuel ammonia and contribute to its wider use as a lower-environmental-impact next-generation fuel.

ClassNK carried out the design review of the A-FSRB in line with its Part PS of Rules for the Survey and Construction of Steel Ships and Guidelines for Floating Offshore Facilities for LNG/LPG Production, Storage, Offloading and Regasification. Currently, there are no international regulations for floating storage and regasification facilities when the cargo is ammonia, and it is expected that the unique requirements of ammonia will have to be reflected in the design.

ClassNK will actively continue to take part in advanced initiatives toward decarbonization and also support the decarbonization of the entire industry by incorporating the knowledge gained through collaboration with front runners into rules and guidelines.