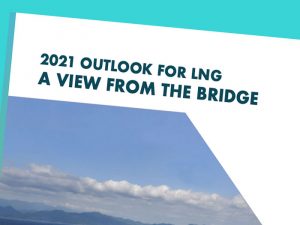 A report just released by SEA-LNG, the multi-sector industry coalition advocating for LNG as a marine fuel, says that LNG-fueled vessels account for approximately 13% of the current newbuild order book, with 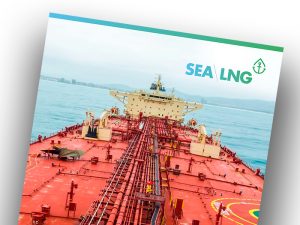 The SEA\LNG coalition has released the results of an investment study that, it says, shows that LNG is “a compelling investment solution” for VLCCs operating onthe Arabian Gulf to China trade route. 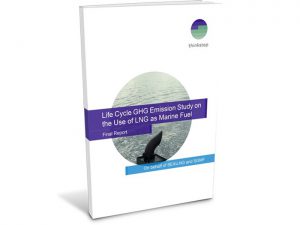 According to a just-released independent study, reductions in ship emissions of GHG of up to 21% can be achieved using LNG as a marine fuel, compared with conventional oil-based fuels over the 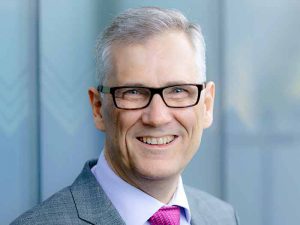 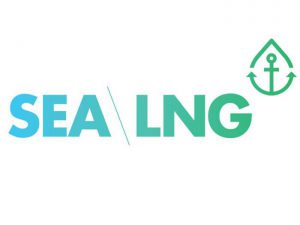 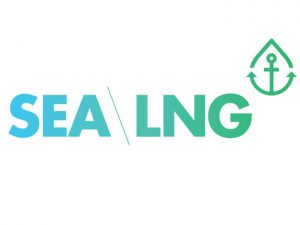 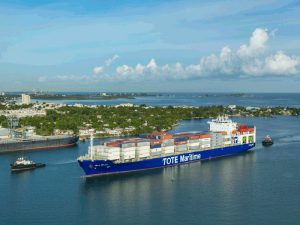 The goal of the initiative explains TOTE Inc. Executive Vice President Peter Keller, who is serving as SEA\LNG’s Chairman, is to address “market barriers and help transform the use of LNG as a marine fuel into a global reality.”

When it comes to using LNG as a marine fuel, TOTE is all in. It’s committed about $500 million in capital investments to have its entire fleet to burn LNG. The U.S.-flag operator has built two 3,100 TEU LNG-fuelled containerships now in operation between the Port of Jacksonville, FL, and San Juan, PR, and is converting the two ORCA Class Roll-on/Roll-Off ships in its fleet to burn LNG. The first of those two is being converted at Singapore’s Keppel Shipyard this fall.

TOTE is not alone in adding dual-fuel and LNG-Ready tonnage to its oceangoing fleet in the U.S. Harvey Gulf International Marine, Crowley Maritime Corp., Matson Navigation, Kinder Morgan, and SEA VISTA/SEACOR all have vessels in operation or under construction that burn or could eventually burn LNG as a marine fuel. In all, there are 29 vessels that are designed or could be converted to burn LNG as shown in the accompanying table. This does not include inland and coastal vessels such as towboats or ferries.

The U.S. Maritime Administration, for example, is supporting the conversion of a towboat to burn LNG as fuel.

The use of LNG as a marine fuel has increased with Emission Control Areas (ECAs) coming into force in Northern Europe and North America under MARPOL Annex VI. LNG is relatively clean burning, containing virtually no sulfur content and it produces lower NOx and particulate matter in the combustion process than fuel oil and marine diesel oil.

LNG is therefore able to offer a fuel solution compliant with both current and anticipated future regulations.

The larger effect from Annex VI will come when the requirement to reduce sulfur content of marine fuels to 0.5% on a global basis effective 2020 or 2025 depending on the outcome of an IMO low sulfur fuel availability study to be completed in 2018. The issue for ship owners and operators is how to find alternatives to economically meet the low sulfur fuel mandate about to be imposed by MARPOL Annex VI.

However, while LNG is a competitive fuel relative to current alternatives, LNG infrastructure is needed in ports around the world to enable quick, safe and cost effective bunkering. In the U.S., the first LNG bunker transport barge with GTT Mark III Flex tank technology is under construction at Conrad Orange shipyard in Orange, TX, and expected to be delivered in early 2017. LNG bunkering infrastructure is far more advanced in Europe.

“Everybody is calling for alternatives to reduce environmental impacts says Philip Olivier, CEO of ENGIE Global LNG. “That’s why we have joined forces to actively promote LNG as a key fuel in maritime transport. LNG has the potential to take a 10% market share of global bunker demand by 2030. ENGIE will contribute to achieving this target.”

Lauran Wetemans Shell’s general manager downstream LNG agrees. “To make the transition to LNG as a fuel happen it needs close collaboration with key players across the full value chain,” says, Wetemans. “SEA/LNG aims to promote the benefits and potential of LNG fuel, and create a level playing field for LNG with other fuels. It will complement the work being done by other organizations like the Society for Gas as a Marine Fuel.”

Leo Karistios, Gas Technology Lead, Lloyd’s Register, points out, “LNG fuelled shipping has mainly been for the visionaries and, until now, concentrated in specialist ship sectors: short sea shipping and ferries, mainly sailing between two fixed ports. We want to help drive the expansion of LNG as a marine fuel of choice, with not just more short sea and local ships burning gas, but also the deep sea trades.”

Timo Koponen, Vice President, Flow & Gas Solutions, Wärtsilä Marine Solutions, says his company will contribute “its vast experience and know-how in gas driven propulsion systems and the entire gas value chain” to the initiative. “By working together, we plan to overcome the challenges and speed the general acceptance of LNG. Having been a pioneer in the use of LNG as a marine fuel, and a developer of major technologies facilitating the adoption of LNG fuel, it is natural that Wärtsilä supports wholeheartedly the aims of the SEA/LNG coalition.”

The goal is to develop a Kamsarmax bulk carrier design to be the first of this type suitable for worldwide services powered by LNG in compliance with the IMO’s Energy Efficiency Design Index 2025 standards, NOx Tier III and MARPOL Annex VI SOx emission levels. This landmark design will be the first LNG-fueled cargo ship capable of full-range operations.

“The long-term potential for LNG as a marine fuel is tremendous,” says ABS Vice President of Global Gas Solutions Patrick Janssens. “We see the near-term opportunities for larger vessels on fixed and known trade routes, but more opportunities will emerge as concepts mature and bunkering infrastructure expands. Environmental stewardship will continue to be a concern, and owners will be evaluating alternative fuel choices.”

“Project Forward represents a milestone for the shipping industry in bringing to the market a practical, achievable design for what are the workhorses of the shipping fleet,” says Arista Shipping Principal Alexander P. Panagopulos. “Our mission is to develop the next generation of energy efficient and environmentally friendly dry bulk cargo ships to be sustainable worldwide beyond 2030. It marks a number of ‘firsts’ and draws together the experience of a team of leaders in their field to make LNG powered shipping a reality on the high seas.”

Technical challenges in developing this design were considerable, as there is a need to carry a large volume of LNG (2,500 m3) – which corresponds to full-range operation and 40 days – in a type of ship where available space is limited and cargo space is at a premium.

ABS will provide Approval in Principle (AIP) for the concept, which is based on the highly optimized Deltamarin B.Delta 82 design, utilizing a GTT membrane LNG fuel tank. This design also could be applied to other bulk carrier sizes and serve as the basis for an LNG-fueled tanker. The concept features a Wärtsilä four-stroke, medium-speed engine without auxiliary generators, the first time this configuration has been applied to a vessel of this type, significantly simplifying the vessel’s engine room arrangement and contributing to lower capital expenditure.

Read more from our Green Technology & Sustainable Shipping section in our Digital Edition.