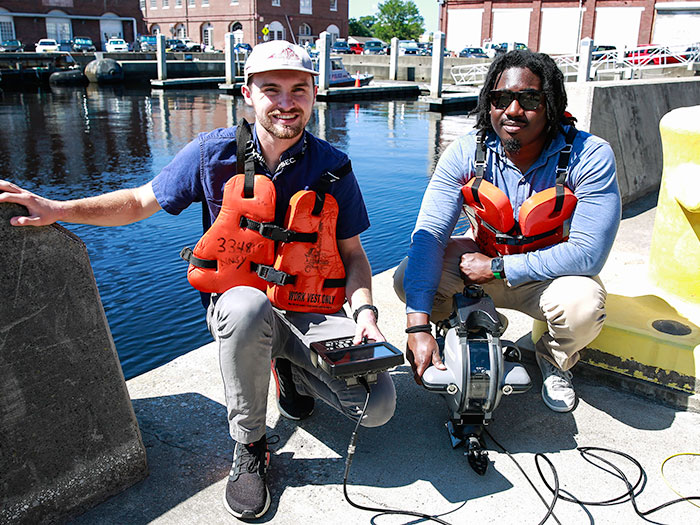 The ROV, known as the Deep Trekker DTG3, was utilized to inspect multiple sea chests alongside divers as a proof of concept, providing favorable results to ensure its capabilities for future projects.

“I came to Norfolk Naval Shipyard about 11 months ago and during my short time here I have been looking for ways to make processes a little more efficient,” said Williford. “When I came into the lab, the team was looking for ways to utilize its drone technology, specifically the use of underwater ROVs. In the [Surface Ship Structural Planning Branch] we perform routine inspections on vessels that require Navy divers to go underwater to examine tanks and more. Though the ROV wouldn’t be able to manipulate anything under the water, it could provide visual inspections, similar to what the divers do, so we began the process to test and see if this was a viable option.”

Williford teamed up with the lab’s Drone Program Lead Brutis Goodson and together they began planning with the ship and project team to perform the ROV dive.

“Currently when you do any type of underwater inspection at the shipyard, you have to utilize the Navy divers who enter this dangerous environment under the ship in order to perform their monitoring,” said Williford. “In addition, these dives take a lot of time to setup for the dive, including positioning the dive barge, ensuring the divers are geared and ready to go.”

“Unlike the previous efforts with the divers, we would need 24 hours notice ahead of time to provide security and the ship with a flight request, saying where we plan to launch and land the vessel in question,” said Goodson. “It would then take us no more than an hour the day of to get the ROV to the location, setup, and in the water to perform the inspection as long as everything is tagged out properly. It saves time, resources, and keeps our personnel safe which is the biggest factor.”

Williford added, “What’s more is that it is very easy to use the ROV. We connect the remote control to the spool of tether and the ROV calibrates its systems before we lower it into the water. It operates similar to a game controller or remote-controlled boat. We use the controller to maneuver the vessel underwater, utilizing the compass to plot our course and the visuals we need to perform the inspections.”

Following the successful test with CVN 77, the team is looking at furthering the use of the technology at the shipyard, including performing inspections for USS Dwight D. Eisenhower (CVN 69) and other vessels. The ROV is expected to complete these inspections more rapidly than the current processes and can ensure the safety of personnel by no longer sending divers under the ships.