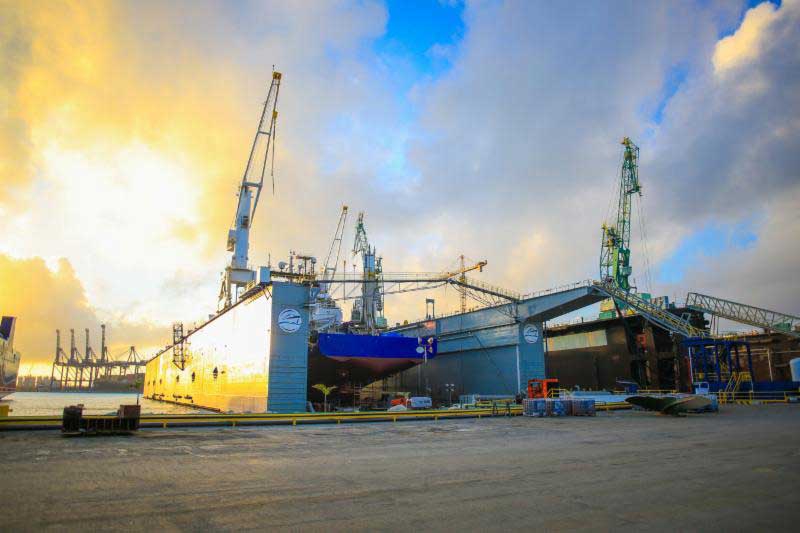 AUGUST 1, 2017 — In addition to all the cruise ship work for which it is well known, Grand Bahama Shipyard (GBS), the largest shipyard in the Caribbean, also carries out a large volume of work on a broad range of other commercial vessels.

In the first half of this year, the yard completed work on 30 non-cruise vessels, predominantly repeat business from U.S. East Coast, Gulf and Caribbean operators and transporters such as Crowley, OSG, Seabulk, Seaboard, Tropical, TrailerBridge and Tote and and including tankers, bulk carriers, containerships, tugs, dive support vessels and drilling support vessels.

Long-time customer Crowley Marine Services, Inc. will drydock over a dozen vessels in 2017. In January, GBS welcomed the Crowley-managed containership National Glory. In March, works were completed on Barge 750 followed by Tug Legend. Four Crowley vessels, Tug Coastal Reliance, Tug Ensign, Barge 550-4 and Barge Miami all visited in April. Tug Liberty and Barge 750-3′ were both in for their routine class surveys in May. Additional vessels from the Crowley fleet are planned for dry dock throughout the remainder of 2017.

In Dry Dock No 3, OSG Overseas Longbeach was out of the water for 10 days. Highlights of the work included over 300 meters of pipe replacements, overhauls on 14 electric motors and the testing and cleaning of approx. 190 cu.m within 14 tanks in five days. Complete hull treatment and application of high performance coatings concluded the dry dock program.

Polska Zegluga Morska PP returned to the yard with two bulk carriers. Raba in followed by the San. Both were docked in the shipyard’s Dry Dock No.1 for propeller overhauls, minor engine work and seal renewals. The cargo holds received a comprehensive cleaning and coating. A major project on both vessels was complete hull treatment and application of high performance coatings.

Columbus Ship Management’s container ship Monte Tamaro went into Dry Dock No. 3 in February for a 12-day work period. Works included the replacement of stern seals; removal of the propeller and blades. The rudder was removed for survey and was found to be in poor condition, resulting in the procurement and fitting of a new rudder which required the support of the yard machine shop with shaft machining to finished dimensions. The yard supported owner’s technicians with thruster overhauls. UTM gauging of the hull was performed to meet class requirements, on inspection of the results minor steel renewal was required. The hull was completely blasted using the yard’s UHP blasting equipment and owner-supplied coatings applied.

Minerva Marine Inc.’s tanker Minerva Lydia berthed alongside the North Beach Pier for a two-week period in March to overhaul the main engine. This work was performed by the yard’s mechanics under the supervision of owner’s technical team.

In March, MSC returned to the yard with its containership Belle for minor repairs. The success of this project resulted in the award of the containership Michaela,whicht visited the yard for a week-long dry dock period in June for work that included extensive pipe repairs to piping systems in the engine room using approx. 55 meters of galvanized steel pipe that was replaced in four days. Hull treatment included full UHP blasting followed by anti-fouling coating provided by International Paint. The shipyard assisted owner’s appointed technicians with main engine and bow thruster overhaul, impressed current system overhaul and sea valve overhaul of approx. 50 valves.

K & K Schiffahrts GmbH & Co KG’s containership K-Breeze arrived in May for a project that engaged all the key trades with works including sea chests cleaning, inspection of sea valves, propulsion system maintenance of the tailshaft and replacement of stern tube seals; propeller inspection and dye penetrant testing of blade roots and tips.

Bow thrusters were overhauled with all major seals renewed and the steering gear hydraulic cylinders were overhauled and seals renewed. On deck hatchcover seals were replaced and in the tanks cargo and ballast tank valves were repaired and five cases new valves were fitted. Hull treatment included HP wash to hull followed by one full coat of antifouling to flat bottom and two full coats of anti-fouling to vertical sides.

Kure Harbour, a bulk carrier operated by Kyowa Sansho, arrived in May for a comprehensive tank cleaning project, which included the removal of 119,000 gallons of crude. Other works included steel replacement in the cargo hold, ballast tanks, bilge overflow tank.

Other major players who returned to the yard for work this summer] included Ahrenkiel Steamship GmbH & Co, whose Stadt Gotha was in for CPP propeller and hub overhaul; Harren and Partners whose Paradero received a major tailshaft and CPP hub overhaul. Teekay Marine Singapore’s Keena was alongside for electric motor and valve overhaul.

One of the largest pipelay vessels in the world, Allseas’ Solitare, visited in June. The yard was able to accommodate the removal of the stinger to enable docking the vessel. The pipe-lay equipment was the major project and included hinge and bearing housing overhauls and repairs. The yard’s mechanical workshop was able to support the necessary machining operations for this work. While the vessel was in dock the critical path was the “change-out” of propulsion and positioning thrusters. Steel repairs on the main deck included the replacement of approx. 35 tons of AH36 steel.

GBSL is known for delivering both commercial and cruise vessels on time, and often ahead of schedule.

“To meet the needs of our customers, we are dedicated to continual upgrades to our yard, and our services,” says GBSL VP Sales and Marketing, Graham Couser. “Last year significant investments included facility upgrades and purchasing of new machinery and tooling adding to our workshops’ capabilities. We further expanded our facility with capital improvements to the North Beach Wharf. This year we are extending our South Beach and East Beach areas, plus developing a slops recovery system to support the demand of the tanker market.”