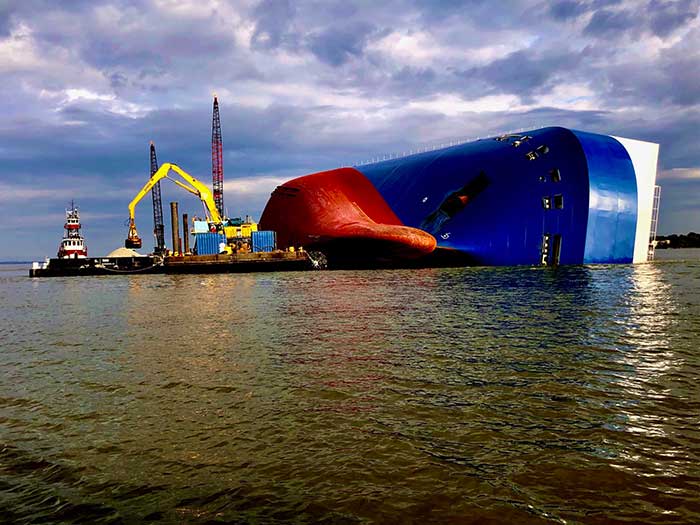 A knuckle boom excavator picks up 1-to-3-inch rock-aggregate from a container barge in St. Simons Sound, Georgia, Oct. 29, 2019. The excavator. guided by sonar and GPS, strategically places the rock next to the hull of the M/V Golden Ray to slow erosion

Responders are placing a rock barrier around the capsized car carrier Golden Ray, which remains resting on its side in St. Stephen’s Sound. Georgia.

Crews from the Unified Command responding to the situation (USCG, Georgia Department of Natural Resources, Gallagher Marine Systems) are strategically placing the rocks next to the hull to slow down erosion around the vessel starting October 28, 2019.

Strong area tidal currents in the sound have been causing erosion and transporting sediment. Once the vessel is completely dismantled and transferred out of the sound, the rocks will be removed using excavators with sieve buckets.

Trucks have been delivering approximately 6,000 tons of rock from several Georgia rock quarries.

The rock is being transported to the ship by barges and being placed placed on the seafloor using knuckle boom excavators and GPS for accuracy. Sonar technology is being now we don’t know what more can you hear used to guide the placement of the 1-to-3 inch aggregate rocks next to the hull of the vessel in real time.

The Army Corps of Engineers and the Georgia Department of Natural Resources have reviewed and approved the operation while engineers work to finalize a vessel removal plan.

“We appreciate everyone’s patience as plans are developed to remove the ship and its cargo from the waterway,” said Federal On Scene Coordinator Norman Witt, Coast Guard commander for the Unified Command. “Response crews are working seven days a week, weather permitting, to prepare the motor vessel Golden Ray for removal.”

Representatives from the U.S. Coast Guard, the State of Georgia, Gallagher Marine Systems, and other local partners continue to work diligently to ensure the safety of its responders and the surrounding community.

The established 150-yard safety zone around the Golden Ray remains in effect and commercial traffic impact has been minimal.