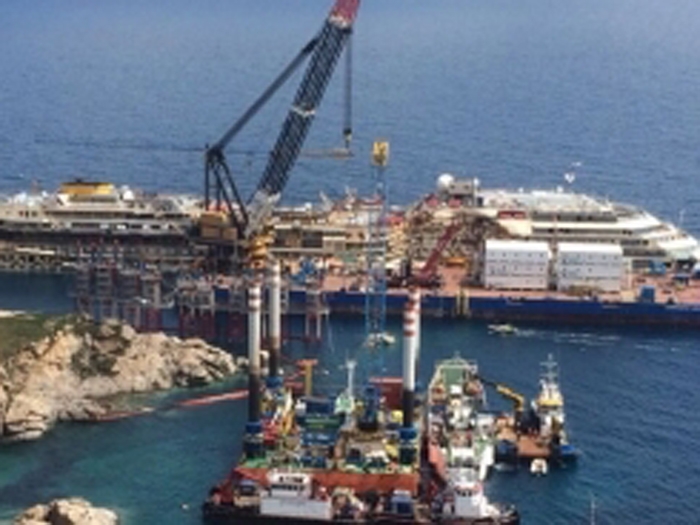 MAY 7, 2014 — Efforts to prepare the wreck of the Costa Concordia for refloating have run into another problem.

As we reported previously, the Titan Micoperi salvage consortium has begun installing the 19 sponsons that will be used to refloat the cruise ship, using the Conquest MB1 crane barge.

Operations to install the first of the sponsons had completed when work was put on hold April 30 as the committee overseeing the project sought further information on plans for the ultimate disposal of the wreck.

On May 2, Titan Micoperi got permission to resume the operation and two more sponsons were installed.

Yesterday, however, came the news that the first sponson to be installed had been knocked out of position which, media reports said was due to a tangled chain.

Today, Titan Micoperi issued an update on the problem that said that the sponson is being kept in position with the support of the Conquest crane as technicians carrying out operations to empty it of ballast water. It says the situation is currently under control and that the sponson will be transported to a shipyard for technical assessments and necessary repairs.

This will mean that the crane barge will not be available for further installation work until it has loaded the damaged sponson onto the barge that will take it to the shipyard.

When that is done, work on installing the remaining sponsons will resume and the first sponson will be reinstalled later.

The Titan Micoperi update also notes that when the sponson got knocked out of place it caused minor damages to the adjacent sponson, which is now being assessed,