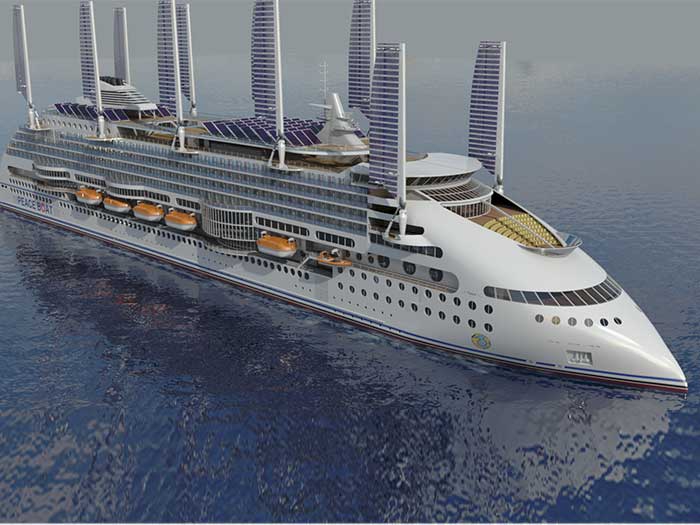 JULY 27, 2017 — Japanese based NGO Peace Boat is making progress with its plans to build and operate the Ecoship, the world’s greenest cruise ship, as the platform for its worldwide educational cruises.

It recently signed a a letter of intent (LOI) with Finnish shipbuilder Arctech Helsinki Shipyard Inc. to construct the Ecoship, with a target delivery date of spring 2020 in time for the 2020 Olympic Games in Tokyo.

Getxo, Spain, based specialist naval design and architecture firm Oliver Design has been working on the project since 2012 and has now completed the full architectural design of the ship, from the first sketches to the plan with the general layout of the vessel, including details of cabins and public areas, external 3D view, videos and other projection and display features.

Oliver Design is working in collaboration with a world-class team of experts, including prominent engineers, scientists and thinkers from the fields of eco-technology and shipbuilding. The work is being coordinated by Peace Boat’s project manager, naval engineer Dr Andrés Molina.

One of the Ecoship’s aims is to show shipowners and shipbuilders that more sustainable vessels are possible.

The design includes 10 large retractable elements made up of solar panels that can operate as large sails in suitable wind conditions. For preliminary design of this feature, Oliver Design worked with German naval engineer Detlev Loell, who brought to the project his expertise as an internationally recognized expert on classic sailing ships.

As well as providing propulsion, the sails also generate power with the Ecoship being designed to include a total of 6,000 sq.m of solar panels with an output of 750 kW.

As well as harnessing renewable energy sources, the ship will have a hybrid engine, capable of being powered by diesel fuel or LNG. This will save up to 20% in fuel consumption and reduce carbon emissions by up to 40%, compared to a similar ship with conventional technology.

The Ecoship will also have all the latest advances in waste disposal and architectural design features based on the biophilia concept. Biophilia is a building concept that advocates maximum use of natural elements such as air, light and water, as well as materials and designs based on nature itself

Oliver Design first made contact with Peace Boat in October 2012 at the International Cruise Summit in Madrid, where Jaime Oliver —founder and CEO of the Spanish firm— first learned of the NGO’s interest in finding a designer for its project. A few weeks later, a whale stranded on a beach in his native Basque Country gave Oliver the inspiration he needed for the first outline sketch.

From this initial idea, Oliver Design developed the preliminary version of the plans for the Ecoship. Yoshioka Tatsuya, founder and director of Peace Boat, subsequently visited Oliver Design’s head offices, and an agreement was signed awarding the Spanish company an exclusive commission for the architectural design of the Ecoship.

Over the last a year and a half, the project has had an enthusiastic reception at a number of global forums on the environment and sustainability, including the Twenty-First International Conference on Climate Change held in Paris in December 2015, the World Future Energy Summit in Abu Dhabi in January 2016 and the TED2017 Conference in Vancouver in April. It was first presented to the cruise industry at Seatrade Cruise Global 2016, in Fort Lauderdale, FL, last year.