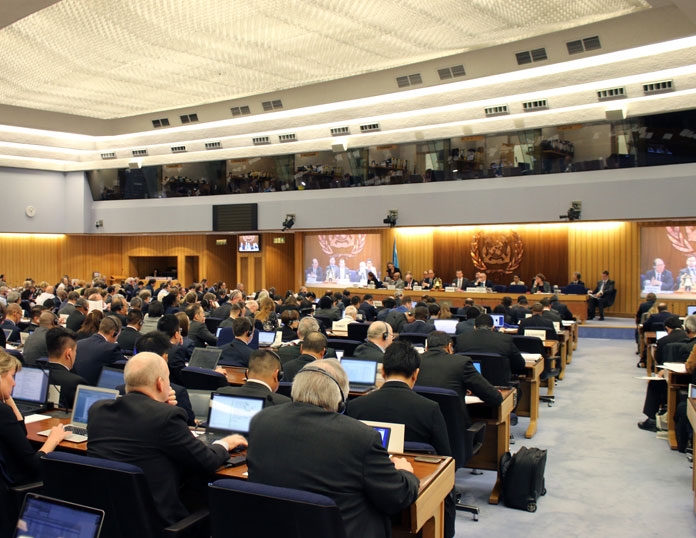 APRIL 22, 2016 — IMO’s Marine Environment Committee (MEPC) has apparently made some progress on CO2 reduction at its meeting in London this week, particularly on the adoption of a global CO2 data collection system.

Once the necessaryamendment to the MARPOL Convention enters in force, all ships over 5,000 GT will be required to provide information on CO2 emissions via their flag states. The International Chamber of Shipping says that IMO member states will then be better placed to consider development of additional CO2 reduction measures and respond to the Paris Agreement on climate change.

“Most of the details have been agreed, including the important fact that CO2 reporting will be mandatory. We are confident that the IMO system will be fully adopted at the next MEPC meeting in October” said ICS Secretary General, Peter Hinchliffe. “We believe that IMO member states have agreed an acceptable compromise between governments primarily interested in data on fuel consumption and CO2 and those that wish to collect additional information, for example on so called transport work.”

“The priority now is to persuade the European Union to adjust its unilateral regulation on the reporting and verification of individual ship emissions to make it compatible with what has now been agreed at IMO,” said Mr. Hinchcliffe. “While this may be an uphill struggle, we have been encouraged by the constructive attitude taken by EU member states this week, as well as those other nations that initially had concerns about the decision to make the IMO system mandatory.”

“It is very positive that IMO Member States have been able to agree on these steps in the wake of the Paris agreement on climate change,” said Patrick Verhoeven, Secretary General of ECSA, the European Community Shipowners Association. “It confirms the unique leadership of IMO to tackle the growth of greenhouse gas emissions from our industry. We are especially pleased that under the global data collection system reporting of CO2 emissions will be mandatory.”

In a separate submission to the MEPC meeting, ICS responded to the Paris Agreement on climate change with the proposal that IMO should develop an Intended IMO Determined Contribution for CO2 reduction on behalf of the sector. This would mirror the commitments or Intended National Determined Contributions (INDCs) that governments have made for their national economies, but from which international transport is currently excluded.

ICS says its proposal was well received by a number of IMO Member States and will be taken forward to the October meeting with other submissions made by governments and others with respect to how IMO should respond to the Paris Agreement.