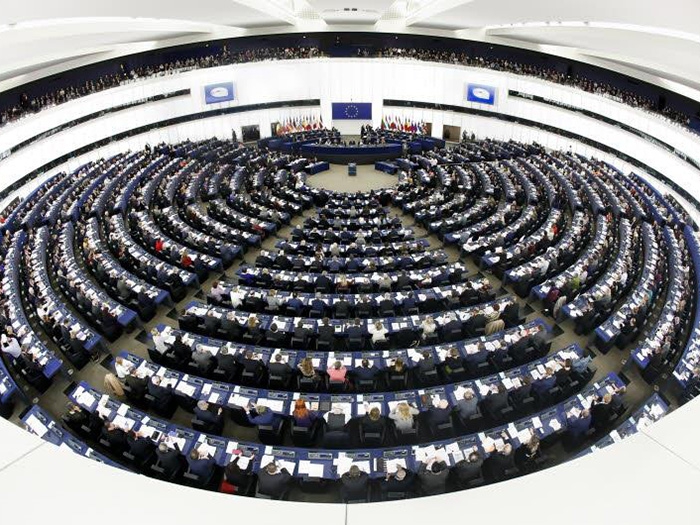 FEBRUARY 15, 2017 — The European Parliament has voted 379 to 263 approve a measure on carbon trading that, among other things, would drag shipping (including non EU-ships) into the EU Emission Trading System from 2023, if there is no comparable IMO system operating in 2021..

A European Parliament press release reports that “MEPs say that, in the absence of a comparable system operating under the International Maritime Organization (IMO), CO2 emissions in EU ports and during voyages to and from them should be accounted for. They propose setting up a ‘maritime climate fund’ to compensate for maritime emissions, improve energy efficiency, facilitate investment in innovative technologies and reduce CO2 emissions from the sector.”

Needless to say, shipowners are strongly opposed to all this.

“This vote for a unilateral, regional measure simply risks polariszing debate among IMO Member States which have already agreed to develop a strategy for reducing shipping’s CO2 emissions in line with the goals of the Paris Agreement on Climate Change,” said the International Chamber of Shipping’s Director of Policy & External Relations, Simon Bennett. “The vote completely ignores the real progress that has already been made by IMO – which under the Kyoto Protocol, to which EU Member States are signatory, has a mandate to address CO2 emissions from international shipping.”

IMO adopted technical regulations as long ago as 2011 which will ensure that all ships built in eight years’ time will be at least 30% more CO2 efficient than most of the fleet operating today, and the global shipping sector has already dramatically reduced its total CO2 emissions despite an increase in global trade. (A 10% reduction over a 5 year period was recorded by the 2014 IMO Green House Study, which is the latest available data).

Mr. Bennett said that “EU Member States, which are also members of IMO, now have a duty to reject these unhelpful proposals, as they are taken forward as part of the wholesale attempt to reform the EU Emissions Trading System. Trying to include thousands of small shipping companies – including thousands of companies not based in the EU – into a system designed for major EU power generating companies and steel and cement producers is only going to complicate this reform.”

“Reducing CO2 from shipping is a global problem which can only be addressed successfully at global level by IMO.” he added.

“As we saw when the EU unsuccessfully tried to impose the ETS on international aviation, non-EU Governments are not going to take kindly to being told that ships flying their flag, when visiting EU ports, may have to pay money into EU schemes designed to help subsidise the closure of European coal mines.” Mr Bennett observed.

ICS says it is working closely with the European Community Shipowners’ Associations (ECSA) in order to persuade EU Member States and the European Commission to reject these proposals, in view of their support for a global solution at IMO.

Commenting from Strasbourg, ECSA Secretary General Patrick Verhoeven said: “Putting unrealistic pressure on IMO with regional measures that will gravely hurt a global sector and do very little for climate is not the way to proceed. It will unduly complicate the achievement of an effective and timely global agreement in IMO that everyone in the end wants. We thank those MEPs that voted against the inclusion of shipping and hope this spirit will prevail in the upcoming trilogue negotiations.”

ECSA says the European Parliament negotiations with Member States and the Commission could start relatively soon and that ECSA will continue to strive for the full exclusion of shipping, so that the IMO roadmap agreed in October last year will have maximum chance of succeeding.

ECSA notes that the IMO roadmap has defined tasks and timelines to reduce greenhouse gas (GHG) emissions from ships. It complements the decision to have a mandatory global GHG data collection system in place as of 2019. The data collection system will make it possible to define the contribution of international shipping to the climate goals set by COP21 in Paris at the end of 2015. The adoption of an initial strategy to meet the Paris’ objectives is already planned for 2018 and an agreement on targets and measures, including an implementation plan, will come about in 2023 once real time data have been analyzed. The timing of the roadmap is entirely consistent with the timeframe agreed in Paris.

“INTERTANKO and its Members consider the EU Parliament’s ambition as totally counter-productive,” said INTERTANKO Technical Director Dragos Rauta. “This undermines the work undertaken by IMO and may upset the spirit of cooperation under which IMO develops global rules for a global industry.”

It is important to bear in mind, said INTERTANKO, that this is not the final text of the revised ETS Directive, which, originally, did not include shipping; it represents the European Parliament’s position for negotiations with the EU Council (Member States). These negotiations will start as soon as the Council/Member States have agreed on their own position, which is expected in the next few weeks.