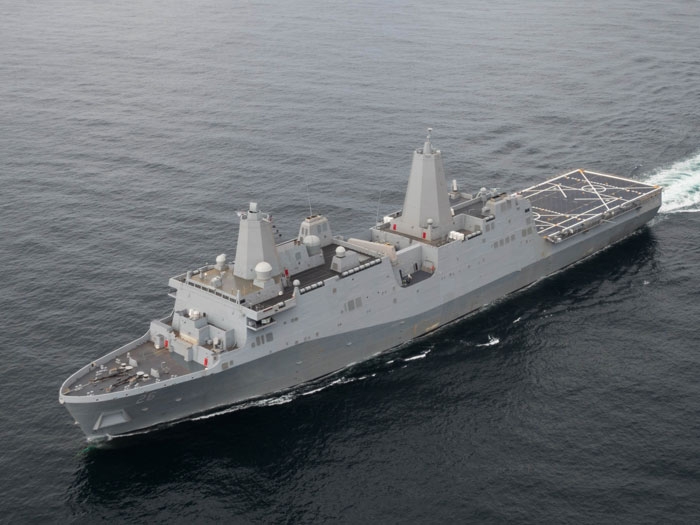 During builder’s trials the ship is taken underway for a series of testing and at-sea demonstrations, which ready the ship for full testing demonstrations with the U.S. Navy’s Board of Inspection and Survey (INSURV).

“With the launching of LPD 27 last month and the completion of LPD 26 Builder’s Trials this week, our government/industry team has met every challenge in a busy schedule,” said Supervisor of Shipbuilding, Capt. Joe Tuite. “To achieve a successful trial, our team completed over 750 tests leading up this week and assessed the operability of the ship through over 240 separate events during the trial. They assessed everything from lowering the stern gate to operating the anchor ensuring the future USS John P. Murtha will be combat ready.”

“Overall the builder’s trial was successful, and the ship performed well,” said Kari Wilkinson, Ingalls’ LPD 26 program manager. “This shipbuilding milestone is another accomplishment for a seasoned LPD production and test team that is ready to continue the learning on future LPD platforms. This team understands the important mission LPDs provide to our nation, and we look forward to delivering another fine, much-needed asset to our sailors and Marines.”

Among the highlights of the at-sea trials, LPD 26 completed a full power run, self-defense detect-to-engage exercise, evaluation of key combat and communications systems, rapid ballast/de-ballast operations, steering checks, and anchor handling demonstration..
Shipbuilders will now prepare John P. Murtha for INSURV acceptance trials in April. The ship is scheduled to be delivered to the Navy in the second quarter of 2016.

“LPD 26 experienced an excellent builders trials,” said George S. Jones, Ingalls’ vice president of operations. “This is another fine testament to the dedicated men and women of Ingalls shipbuilding and their shipbuilding talents. The John P. Murtha is a quality ship, and the ability to deliver her on schedule later this year is a result of great craftsmen and the outstanding Navy partnership we have with the Supervisor of Shipbuilding, Gulf Coast.”

LPD 26 is named in honor of the late John P. Murtha, who represented Pennsylvania’s 12th Congressional District from 1974 to 2010. Murtha was also a veteran of the U.S. Marine Corps and Reserves. He served for 37 years and received the Bronze Star with Combat “V,” two Purple Hearts and the Vietnamese Cross of Gallantry for his service in the Vietnam War. He retired as a colonel in 1990.

Ingalls has built and delivered nine ships in the San Antonio class. In addition to John P. Murtha, Ingalls has the eleventh LPD, Portland (LPD 27), under construction and received a $200 million advance procurement contract for the twelfth ship in the class, LPD 28, in December 2015.

The San Antonio class is the latest addition to the Navy’s 21st century amphibious assault force. The 684-foot-long, 105-foot-wide ships are used to embark and land Marines, their equipment and supplies ashore via air cushion or conventional landing craft and amphibious assault vehicles, augmented by helicopters or vertical takeoff and landing aircraft such as the MV-22 Osprey. The ships support a Marine Air Ground Task Force across the spectrum of operations.