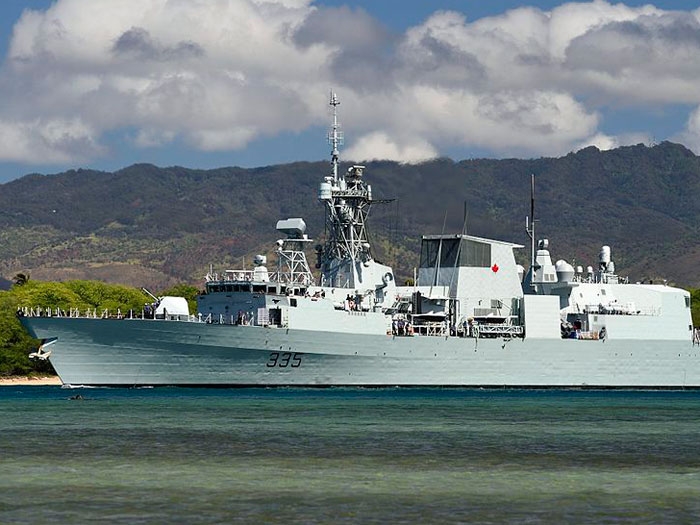 As part of its mid-life upgrade program, the Royal Canadian Navy awarded Lockheed Martin’s Ottawa-based Mission Systems and Training (MST) business a contract in 2008 to integrate the combat management system on all 12 Halifax-class frigates, including radars, major critical sensors, command and control systems, the operations room, and a suite of simulation and training systems.

Under contract to Lockheed Martin, Seaspan has managed the disassembly and removal of legacy systems, the retrofit and renovation of space on-board, and the installation of new systems and sensors for the five west-coast based frigates.

Rosemary Chapdelaine, Vice President and General Manager for Lockheed Martin Canada MST, said, “The expertise, innovation and collaboration Seaspan brings to our team is helping Lockheed Martin deliver value to the Royal Canadian Navy by ensuring ships are returned to the fleet on-time and ready to go-to-sea. Seaspan has often achieved critical path milestones early and has been essential to the project’s success.”

In a congratulatory letter, British Columbia Premier Christy Clark commented on the award, “Today’s event is a reflection of the significant influence that Seaspan and Lockheed Martin Canada have had on the shipbuilding industry in our province. Congratulations to Seaspan, and thank you to everyone at Lockheed Martin Canada for the time and effort you have put into making this award presentation possible.”

Work completed on Canada’s frigates is providing opportunities to expand the program internationally. Lockheed Martin Canada signed a $180 million contract in May 2014 to supply the combat equipment to modernize New Zealand’s Te Kaha and Te Mana Anzac-class frigates. The first New Zealand frigate slated for modernization is expected to arrive at Seaspan’s Victoria Shipyards in mid-2016, contingent on a contract being finalized this year.

“It is rewarding to be recognized for the work we do for the Royal Canadian Navy,” said Brian Carter, President, Seaspan Shipyards. “We are grateful to Lockheed Martin Canada for bestowing on us its supplier excellence award for our work on the Halifax-class modernization program. Our contribution has benefited from a strong working relationship with Lockheed Martin Canada, the unwavering commitment of our Victoria Shipyards tradesmen and management, and an effective working relationship at the shipyard with the Royal Canadian Navy.”