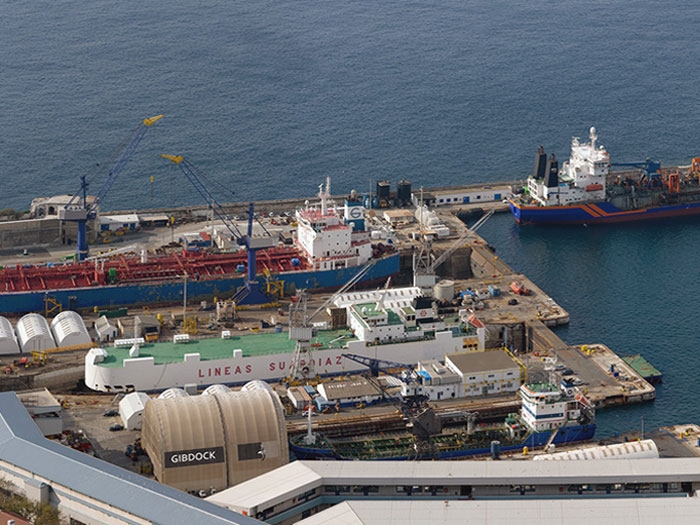 DECEMBER 23, 2015—Gibraltar-based ship repairer Gibdock reports that a surge in bookings by new and repeat customers into the first two quarters of 2016 will propel it in the first half of next year.

The Gibdock enters its customary busy ferry season buoyed by repeat business from owners of a variety of ship types, and the completion of its first exhaust gas scrubber installation project. Dock 1, Gibdock’s largest drydock, is already fully booked until the end of February 2016.   Customers new to Gibdock in 2015 are returning.

Peter Döhle Schiffahrts recently followed up on its inaugural docking of the 1,730 TEU capacity containership Amanda by booking two more ships, the Cecilia and Xian.   “Containership work from German owners is a mainstay yard activity, but it is always pleasing when a first-time owner brings repeat business,” says Richard Beards, Gibdock Managing Director. “Peter Döhle made it crystal clear that no delay would be acceptable with Amanda, as the vessel had to catch its next charter. Our team achieved the high standard in quality of work, as well as meeting the scheduling challenge; we pride ourselves on delivering vessels back to owners setting even the tightest deadlines.”

Another notable returning customer in the fourth quarter of 2015 has been Van Oord, whose vessel Lelystad became a third-time visitor at Gibdock in November. The 137m length trailing suction hopper dredger is undergoing a 35-day refit, including extensive steel work and large diameter pipe renewal, a complete overhaul of the vessel’s main engines, and hopper valve repairs including seal restoration.   “The second half of 2015 was exceptionally busy at the yard, having also included our first Exhaust Gas Scrubber retrofit – our largest single 2015 assignment,” adds Beards.

The yard is due to retrofit Alfa Laval PureSOx EGS units to the last of five vessels operated by Norbulk Shipping and owned by Vroon, in a contract which also includes the special survey drydocking of all five ships. To optimise EGS work, Gibdock prefabricates smaller blocks in its workshops, before transfer to its dedicated assembly area at Pad1 alongside Dock 1.   “We go into 2016 having set down a marker that our strategic location provides a Southern European option for high quality and on-schedule SOx abatement technology retrofit work,” says Beards.   Gibdock’s strategic location was highlighted in the last quarter of 2015 with the docking of the Royal Navy’s Hydrographic Squadron vessel HMS Scott, in a 19-day refit mainly taking place afloat in Gibdock’s No. 2 drydock.  The project follows on from a repair contract on the multi-role Royal Navy hydrographic survey ship HMS Echo in 2014. “Our task has been to deliver to MOD standards within a commercial timeframe,” says Beards.