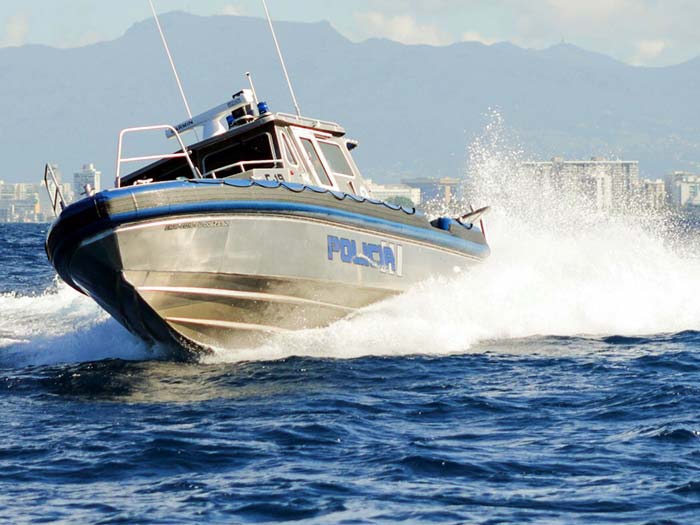 The PRPD’s newest Metal Shark features a fully-enclosed, climate-controlled pilothouse for all weather operation, outfitted with Shockwave shock-mitigating seating for a crew of four. Triple Mercury 300 HP Verado four-stroke outboards push the vessel to speeds in excess of 45 knots while offering responsive handling and a smooth dry ride.

The Metal Shark 35 Defiant is the first new boat to enter service with the PRPD since Hurricane Maria devastated Puerto Rico in September. The vessel has been put to use in the ongoing hurricane recovery efforts alongside the PRPD’s other Metal Sharks, all of which weathered the storm undamaged and have served on relief missions around the coast of mainland Puerto Rico and the islands of Culebra and Vieques.

“Metal Shark is honored to support the Puerto Rico Police Department with the most advanced, capable, and durable law enforcement boats on the market,” said Henry Irizarry, Metal Shark’s Vice President of International Business Development, during crew familiarity training aboard the new vessel in San Juan. “These boats are a vital part of the PRPD’s efforts.They are operated in open-ocean conditions, around the clock, for up to 3,000 hours per year, so safety and reliability are crucial. It’s a testament to the quality of these boats that the PRPD continues to choose Metal Shark for its fleet modernization efforts.”

The Metal Shark vessels are operated by the PRPD’s Fuerzas Unidas de Rapida Accion (FURA), which is an agency within the PRPD operating specialized divisions relating to and coordinating with U.S. federal law enforcement agencies including the Federal Bureau of Investigation, the U.S. Marshals Service, and the Department of Homeland Security.