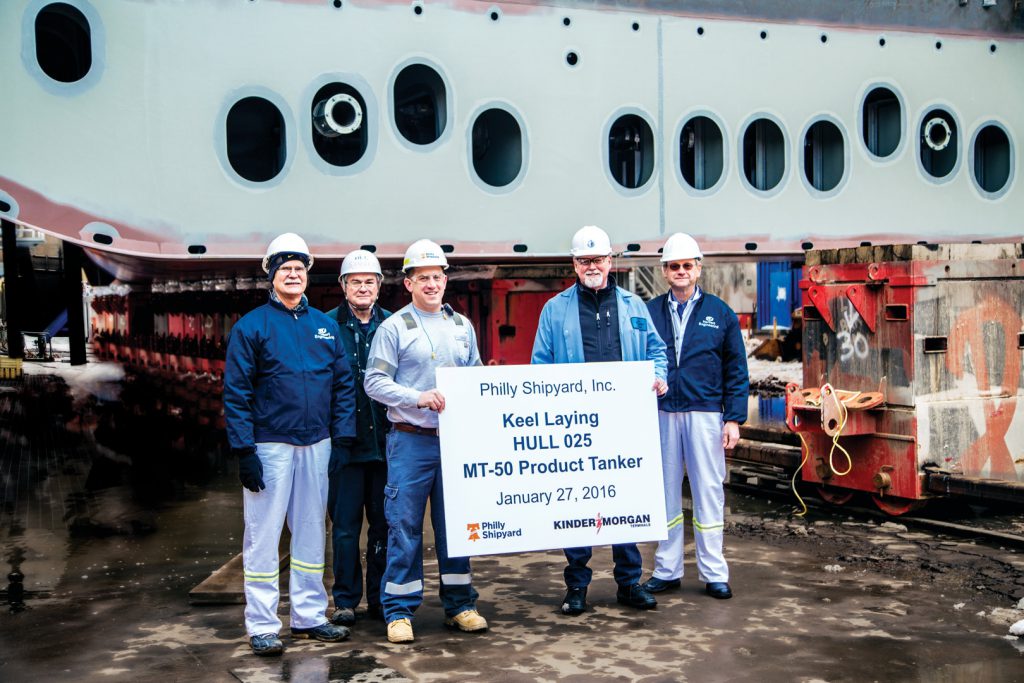 JANUARY 28, 2016 – Philly Shipyard, Inc. yesterday held a ceremonial keel laying for the first product tanker in a four vessel order for American Petroleum Tankers (APT), a Kinder Morgan, Inc. subsidiary. When completed at the end of this year, the vessel will be 600 feet long and capable of carrying 50,000 tons of crude oil or refined petroleum products.

In keeping with long held shipbuilding tradition, coins were placed on one of the keel blocks before the 650 ton unit was lowered into place in the dry dock. Representatives and guests from Philly Shipyard, Kinder Morgan and the United States Coast Guard were in attendance to place the coins as a sign of good fortune and safe travels.

Philly Shipyard representatives included the most recent recipients of the company’s “Safety Team of the Quarter” award, who were recognized for exemplifying safe operation during the fourth quarter of 2015.

“Today marks our twenty-fifth keel laying celebration and I couldn’t be more proud of the 1,200 men and women of Philly Shipyard for their unyielding pride and passion that continues to bring all of our vessels to life,” said Steinar Nerbovik, Philly Shipyard’s President and CEO.

“This is an exciting day for Kinder Morgan. We look forward to taking delivery of this state-of-the-art vessel at the end of 2016,” said Robert Kurz, vice president of Kinder Morgan Terminals and president of APT.

The Tier II 50,000 dwt product tankers on order for APT are based on a proven Hyundai Mipo Dockyards (HMD) design which incorporates numerous fuel efficiency features, flexible cargo capability and meets the latest regulatory requirements. The vessels will be constructed with consideration for the use of LNG for propulsion in the future. Herbert Engineering is providing owner’s supervision for the ships.