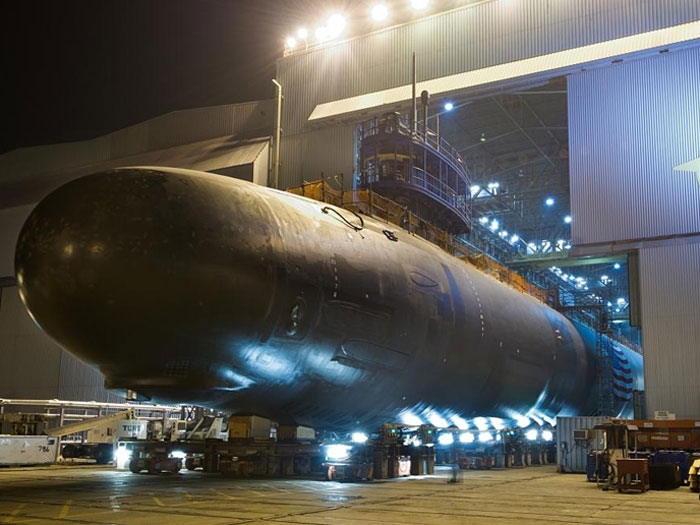 North Dakota is the 11th ship of the Virginia Class and the first Block III Class submarine and features a redesigned bow that replaces the traditional sonar sphere and 12 VLS tubes with a Large Aperture Bow Array (LAB Array) and two Virginia Payload Tubes (VPTs) that can each hold up to six Tomahawk missiles.

On April 16, the Navy said commissioning the submarine, which had been set for May 31, would be delayed “based on the need for additional design and certification work required on the submarine’s redesigned bow and material issues with vendor-assembled and delivered components. As the Navy works with all vested parties to certify the quality and safety of the submarine and toward taking delivery of the boat, it will determine a new commissioning date.”

Presumably, those issues have now been resolved: the alpha sea trials included a range of submarine and propulsion-plant operations, submerging for the first time, and high-speed runs on and below the surface to demonstrate that the ship’s propulsion plant is fully mission-capable.

“The crew and shipbuilders worked together as one unit to take this submarine to sea and put it through its paces,” said Electric Boat President Jeffrey Geiger. “It was an outstanding effort by everyone involved, and demonstrates the commitment of the Navy and industry team to sustain the success of the Virginia-class submarine program. I appreciate the contributions made by the Navy personnel, shipbuilders and suppliers who made it happen.”

In May, the U.S. Navy awarded Electric Boat a contract valued at $17.6 billion for the construction of 10 additional Virginia-class submarines.

Virginia-class submarines displace 7,800 tons, with a hull length of 377 feet and a diameter of 34 feet. They are capable of speeds in excess of 25 knots and can dive to a depth greater than 800 feet, while carrying Mark 48 advanced capability torpedoes and Tomahawk land-attack missiles.