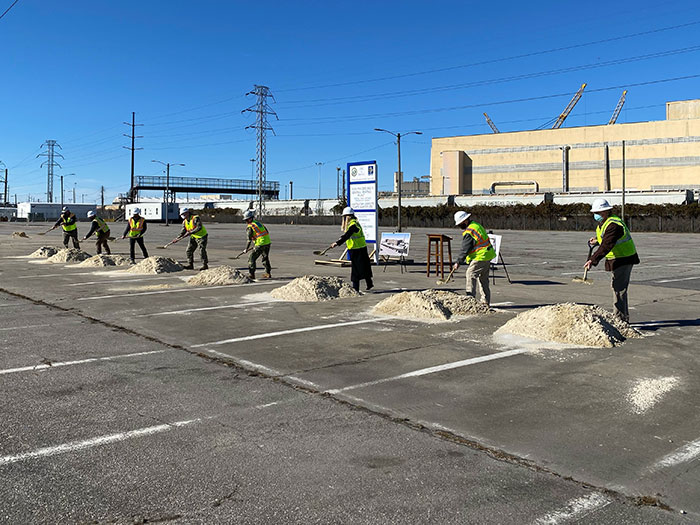 The U.S. Navy and Ameresco Inc. have broken ground on a project at Norfolk Naval Shipyard (NNSY), Portsmouth, Va., that is being performed under a $173 million energy savings performance contract (ESPC) and will expand on-site generation, strengthen reliability, and enhance resiliency at the yard.

Because ESPC’s leverage the savings that they guarantee in order to secure third-party financing, the Navy will not have to contribute up-front funding during the project’s implementation phase.

The project will see Ameresco construct a new 19-megawatt (MW) combined heat and power (CHP) plant, a 3MW battery energy storage system, and a microgrid control system that will provide the site with long-term energy security while reducing the electricity imported from the grid by 68%.

Ameresco will also refurbish existing backup power assets, integrate them into the microgrid, and upgrade the electric distribution system to provide redundant sources of supply.

This project also features a new industrial wastewater treatment plant (IWTP), a critical element of shipyard infrastructure that Ameresco has already begun to build. The effective treatment of contaminated wastewater that the site’s ship repair activities produce is critical to NNSY’s mission of ensuring that ships can return to service on schedule. Tasked by the Navy with assessing potential industrial process improvements, Ameresco developed a solution that produces enough savings from recycling water within the plant, enclosing exposed system components, and reducing operating costs to pay for the complete replacement of the site’s 40-year-old IWTP.

“This project, which features both a new industrial water treatment plant and the integration of a new CHP plant and battery storage within a microgrid control system, will deliver long-term efficiency, reliability, and resiliency in support of the NNSY mission,” said Nicole Bulgarino, executive vice president and general manager of Federal Solutions at Ameresco.

After construction is completed in 2022, Ameresco will operate and maintain the CHP plant, IWTP, and microgrid until January 2044. Each measure is designed to operate in compliance with relevant Department of Defense and Navy cybersecurity requirements. Over the course of the 22-year performance period following construction, the project will generate more than $411 million in guaranteed cost savings.