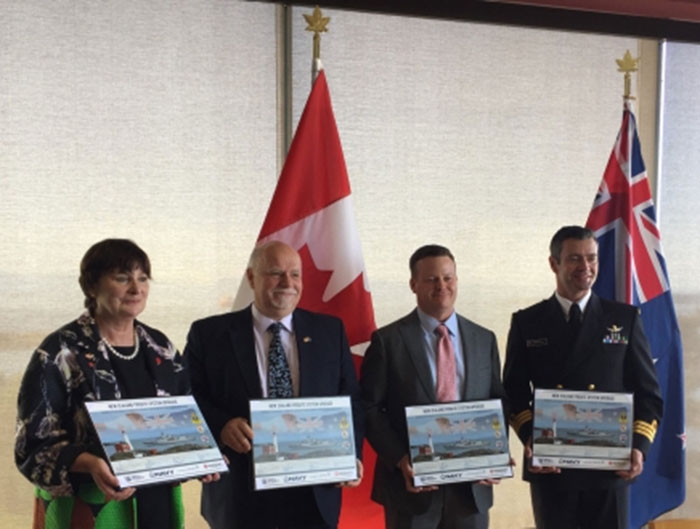 This marks the first time that a foreign warship has been modernized in Canada since the Second World War.

“For the past four years, Lockheed Martin Canada’s Combat System Integration team has been preparing for this day by designing, integrating and testing the Combat System as well as the ship platform design changes for HMNZ Ships Te Kaha and Te  Mana next year. Installation of an advanced combat system will ensure New Zealand has a credible maritime combat capability,” said Gary Fudge, Acting Vice President and General Manager of Lockheed Martin Canada Rotary and Mission Systems (RMS),

As Prime Systems Integrator, Lockheed Martin Canada is responsible for designing and supplying the upgraded combat system for each ANZAC Class Frigate, including a new combat management system – based on Lockheed Martin Canada’s Combat Management System 330 – along with the supply and integration of various sensors, a missile system and a Combat Systems Trainer.

Lockheed Martin Canada is also responsible for the platform design and implementation and has subcontracted Seaspan Victoria Shipyards Co. Ltd in Victoria, BC, to install the new systems on the ship platforms.

“Being awarded this project demonstrates Seaspan’s Victoria Shipyards’ capabilities as a leader in ship repair in North America,” said Brian Carter, President & CEO of Seaspan Shipyards. “With this project, our company is building on its record as a trusted partner for both government and commercial clients in successfully managing complex projects.”

“In partnership with Lockheed Martin Canada, Victoria Shipyards is pleased to take care of HMNZS Te Kaha,” said Joe O’Rourke, Vice President & General Manager for VSL. “Winning this work speaks to the capabilities of the women and men of Seaspan and leaves us well-positioned for realizing similar opportunities in the future.”

HMNZS Te Kaha will undergo extensive upgrades to its surveillance, combat and self-defence capabilities. This will allow it to match current and future threats and address obsolescence of some of the frigates’ current systems. The project builds on VSL’s highly successful subcontract work with Lockheed Martin Canada and the Halifax class modernization project which is nearing completion both on time and on budget.

HMNZS Te Mana, the RNZN’s second ANZAC class frigate, is scheduled to arrive in 2019. Seaspan Shipyards will refit and install the new systems with an expected completion date of 2020 for the entire contract.