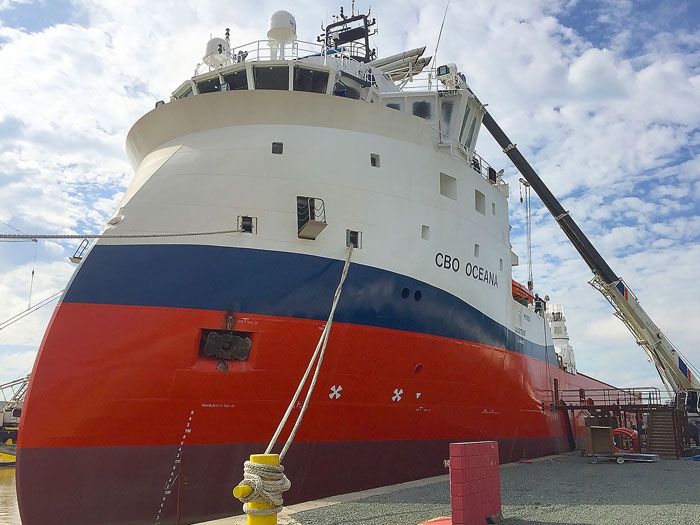 The vessel, a platform supply vessel of Ulstein PX105 design, has now started on a 6-year charter to Petrobras. A sister vessel is also under construction at the shi yard, and is scheduled for completion by the end of the second quarter of this year.

The Ulstein contract with Oceana includes designs and an extended main equipment package, as well as engineering and purchase support.

Speaking at the naming ceremony for CBO Oceana, shipyard manager Paul Kempers stressed the the good cooperation between Ulstein and the yard that had resulted in the delivery of a high-quality ship.

“During her sea trial, I received several reports from the engineers and the Captain on the excellent results in speed, fuel consumption and sea keeping,” Mr. Kempers said.

Mr. Kempers says he is convinced that the construction process for the second ship will be smooth, using the experience gained from the CBO Oceana,

Ulstein’s PX105 design is a large PSV, suitable for work in the Brazilian oil industry.The vessels are 88.9 m long and 19 m wide and have accommodations for 23 people. With a DWT of 4,700 tonnes they comply with the requirements of Petrobras’ PSV 4500 tender.The vessels have a high operational window and can take on complex assignments far from shore. They feature the Ulstein X-Bow, which minimizes slamming.

CBO Oceana on her way to sea trials