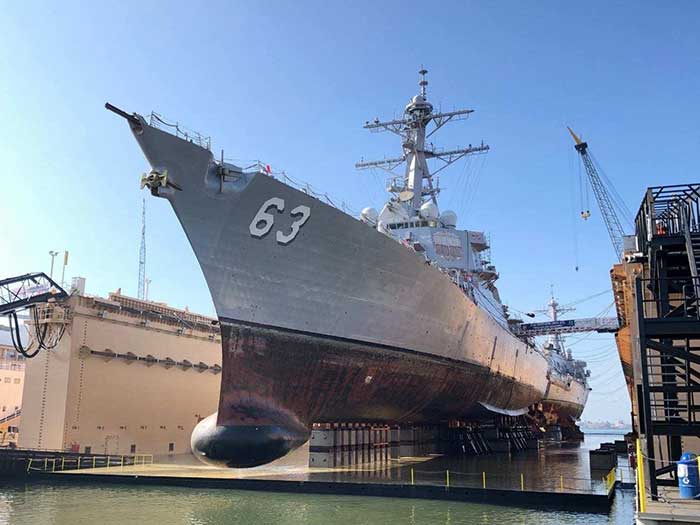 BAE Systems San Diego shipyard has successfully drydocked two destroyers, stern-to-stern, in its Pride of California floating dry dock. The dock is the shipyard’s largest, with a length of 950 ft, breadth of 205 ft and a lifting capacity of 55,000 long tons.

The two Arleigh Burke-class (DDG 51) guided-missile destroyers USS Stethem (DDG 63) and USS Decatur (DDG 73) are in the dock for repair and maintenance work worth a potential $185 million if all contract options are exercised.

The U.S. Navy’s Southwest Regional Maintenance Center (SWRMC) supported the double docking which was carried out on October 8.

“The double docking effort by Industry and the Navy team is a great example of increasing agility with resources available,” said James Geurts, assistant secretary of the Navy for research, development and acquisition. “The concept of double docking Stethem and Decatur can pay long-term dividends to our maintenance planning, strategies and execution to get the increased output needed. This docking adds depth to our maintenance capabilities and builds the muscle memory needed to do it again in the future. It’s increasing flexibility within our existing industrial base.”

The double docking is the first time since 2012, when USS Mason (DDG 87) and USS Bulkeley (DDG 84) were docked in Norfolk, that the Navy has collaborated with Industry to simultaneously drydock two surface ships. The last time a west coast shipyard executed a double docking was in 2011 with the docking of USS Curts (FFG 38) and USS Vandegrift (FFG 48).

“This is an example of how the Navy and our private shipyards are working with a sense of urgency to get ships in and out of maintenance availabilities on time,” said Commander, Naval Sea Systems Command Vice Adm. Tom Moore. “By doubling up in Pride of California, we’re maximizing our available resources.”

Leading up to the tandem docking, SWRMC worked to prepare both ships for the event, readying them to meet stability requirements for successful coordination of the two ship drydocking process.

“SWRMC maintenance teams had to work under a very tight timeline after the ships arrived in San Diego to meet the docking event’s requirements,” said Mike Sylva, SWRMC Waterfront Operation DDG Program Manager. According to Sylva, the ships made some preparations prior to returning to San Diego knowing they would have limited time to prepare for the start of their availability.

The docking event was supported by Lt. Thomas Belna from SWRMC, who served as the docking observer, and two shipbuilding specialists, Severo Elecanal and Jessie Padilla, onboard the ships.

“The effort to align maintenance and modernization on both Stethem and Decatur in a single dry dock is a cost effective and innovative solution by Industry and the Navy,” said Capt. David Hart, SWRMC’s commanding officer. “The simultaneous completion of availabilities allows us to support the on-time delivery of ships to the Fleet.”