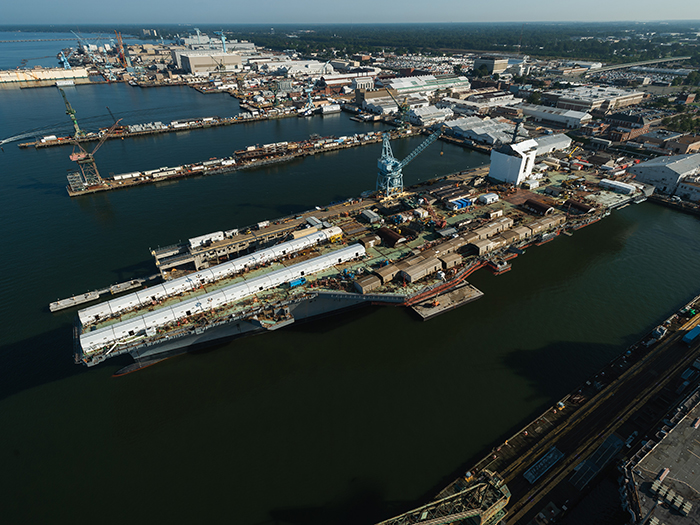 In this aerial photograph, the aircraft carrier John F. Kennedy (CVN 79) sits at Pier 3 at Newport News Shipbuilding. The ship is approximately 76 percent complete and is progressing through final outfitting and testing. Photo by Matt Hildreth/HII

Huntington Ingalls Industries (NYSE: HII) reports that it has received an undefinitized contract award from the U.S. Navy to shift the delivery strategy for the aircraft carrier John F. Kennedy (CVN 79), currently under construction at its Newport News Shipbuilding division, from a two-phase delivery to a single phase.

The contract action has a potential total value of up to $315 million, providing initial funding for the procurement of long-lead material and planning, and is expected to be definitized next year.

The move revises the two-phased delivery approach originally planned for the second ship in the Gerald R. Ford-class of carriers. Huntington Ingalls says it comes as a result of extensive collaboration with the Navy to support legislative requirements for Kennedy to be delivered with its complete warfare system, including F-35 Joint Strike Fighter capabilities, before the ship is commissioned into the fleet.

“We are pleased to have worked with the Navy to adopt lessons learned in the construction of USS Gerald R. Ford (CVN 78) to improve cost, production and planning efficiencies on Kennedy,” said Lucas Hicks, Newport News’ vice president of new construction aircraft carrier programs. “We believe that the single-phase approach ensures the most effective build plan for all remaining work and provides the best value for the Navy by supporting its ability to accelerate operational deployment of this maritime force asset.”

Kennedy is approximately 76% complete. The ship was launched in December 2019, and currently is undergoing additional outfitting and testing at Newport News. It is scheduled for delivery in 2024.