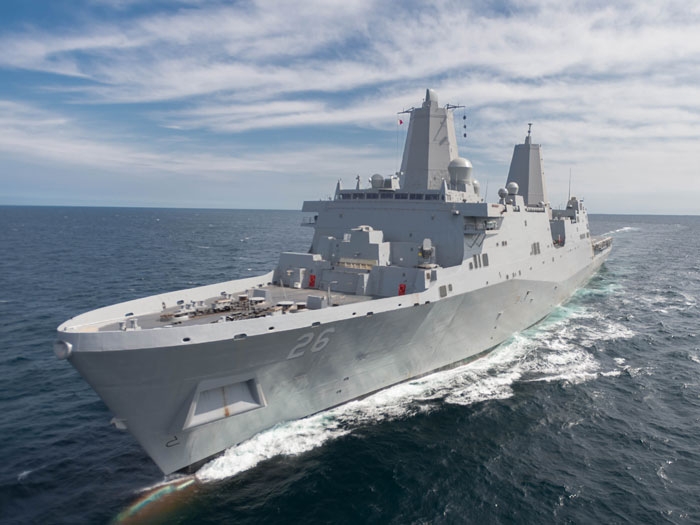 The ship is the tenth San Antonio-class amphibious transport dock built at Huntington Ingalls Industries’ (NYSE:HII) Ingalls Shipbuilding division and spent six days with the test and trials team performing more than 200 trial events that included both an in-port and underway portion.

The trials were conducted by the Navy’s Board of Inspection and Survey (INSURV).

The dockside checks demonstrated the functionality of key systems prior to the underway period. While at sea the future USS John P. Murtha completed a number of demonstrations including a full power run, self-defense detect-to-engage exercises, steering checks, boat handling, anchoring and rapid ballast and de-ballast demonstrations. The tests conducted during the underway period certified that all systems including main propulsion, ship control, combat, communications and damage control were fully inspected and validated for operational tasking.

“It’s been two and half years since Ingalls last conducted LPD acceptance trials,” said Supervisor of Shipbuilding, Capt. Joe Tuite. “The team did an excellent job preparing the ship for a successful trials period. The ship was cleared for sea on the morning of the second day, the earliest of any of the previous nine LPDs.”

“It took a lot of work for the folks to complete these sea trial evolutions, and the ship answered every task and performed well,” said George S. Jones, Ingalls’ vice president of operations. “Every single skill needed to build this amphibious ship was on display for the INSURV board to see. Our people and this ship did not disappoint. I would also like to thank our partners at Supervisor of Shipbuilding, Gulf Coast for this joint effort.”

“This was a significant test at sea for LPD 26, and the ship performed well,” said Kari Wilkinson, Ingalls’ LPD 26 program manager. “The logistical performance it takes for our test and trials team to execute all of these events while underway is nothing short of phenomenal. Once again the Navy will be receiving a quality Ingalls-built ship that will be mission-ready and able to achieve whatever tasks the sailors and Marines require.”

Now shipbuilders will put the final fit-and-finish touches on the ship in preparation for delivery in May. The ship is scheduled to be commissioned in Philadelphia this fall, and will be homeported in San Diego.

The 684-foot-long, 105-foot-wide LPD 17 San Antonio class are used to embark and land Marines, their equipment and supplies ashore via air cushion or conventional landing craft and amphibious assault vehicles, augmented by helicopters or vertical takeoff and landing aircraft such as the MV-22 Osprey. The ships support a Marine Air Ground Task Force across the spectrum of operations,

LPD 26 is named in honor of the late John P. Murtha, who represented Pennsylvania’s 12th Congressional District from 1974 to 2010.Congressman Murtha was a veteran of the U.S. Marine Corps and Reserves. He served for 37 years and received the Bronze Star with Combat “V,” two Purple Hearts and the Vietnamese Cross of Gallantry for his service in the Vietnam War. He retired as a colonel in 1990.

Ingalls has the 11th LPD, Portland (LPD 27), under construction. Portland launched on Feb. 13 and will be christened on May 21. Ingalls has received advance procurement funding for long-lead-time material for the 12th ship in the class, LPD 28.