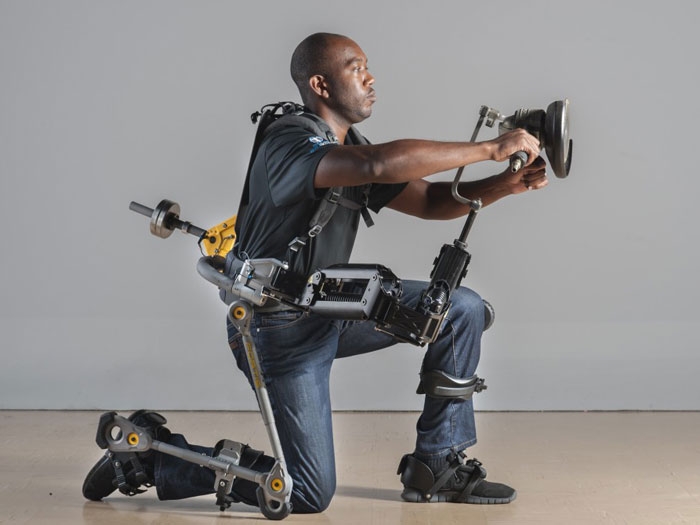 AUGUST 19, 2014 — Technology reminiscent of Marvel’s Iron Man could become a part of the everyday shipbuilding scene. An exoskeleton developed by Lockheed Martin [NYSE: LMT] will soon be under evaluation at U.S. Navy shipyards while, in Korea, Daewoo Shipbuilding and Marine Engineering (DSME) has been evaluating an exoskeleton of its own design at its Okpo Shipyard.

Lockheed Martin’s FORTIS exoskeleton is an unpowered, lightweight exoskeleton that increases an operator’s strength and endurance by transferring the weight of heavy loads from the user’s body directly to the ground. Now the company has received a contract through the National Center for Manufacturing Sciences (NCMS) for the U.S. Navy to evaluate and test two FORTIS exoskeletons. This marks the first procurement of Lockheed Martin’s exoskeletons for industrial use. Terms of the contract were not disclosed.

The objective of this effort is to mature and transition exoskeleton technology to the Department of Defense industrial base and perform testing and evaluation for industrial hand-tool applications at Navy shipyards.

“Ship maintenance often requires use of heavy tools, such as grinders, riveters or sandblasters,” said Adam Miller, director of new initiatives at Lockheed Martin Missiles and Fire Control. “Those tools take a toll on operators due to the tools’ weight and the tight areas where they are sometimes used. By wearing the FORTIS exoskeleton, operators can hold the weight of those heavy tools for extended periods of time with reduced fatigue.”

The FORTIS exoskeleton augments the strength and endurance of maintenance personnel in the physically demanding shipyard environment. Because its ergonomic design moves naturally with the body and allows operators to maintain flexibility, says Lockheed Martin, operators are not hindered by the exoskeleton. This means operators can work longer and more effectively with reduced fatigue from overuse.

Lockheed Martin has been investing in exoskeleton research and development for more than five years, most recently through the NCMS Commercial Technologies for Maintenance Activities (CTMA) program.

“We are pleased that once again a technology advanced through our highly successful CTMA program will be put into commercialization,” said Rick Jarman, president and chief executive officer of NCMS. “The Lockheed Martin FORTIS exoskeleton contract is just another example of how collaboration around research and development speeds the time to market for these important innovations. We applaud Lockheed Martin for seeing the value in our CTMA program.”

Unlike the FORTIS exoskeleton, the DSME exoskeleton prototype is powered.

According to a report in New Scientist, the DSME unit fits anyone between 160 and 185 centimeters tall.

“Workers do not feel the weight of its 28-kilogram frame of carbon, aluminum alloy and steel, as the suit supports itself and is engineered to follow the wearer’s movements,” says New Scientist. “With a 3-hour battery life, the exoskeleton allows users to walk at a normal pace and, in its prototype form, it can lift objects with a mass of up to 30 kilograms.”

A system of hydraulic joints and electric motors running up the outside of the legs links to a backpack, which powers and controls the rig, says New Scientist. Frames designed for individual tasks can be attached to the backpack, with some arcing over the wearer’s head like a small crane. As well as boosting lifting ability, the suit helps workers manipulate heavy components precisely: it takes most of the weight, so the user is effectively handling light objects.

DSME’s research target for the unit’s lifting capacity is about 100 kilograms.