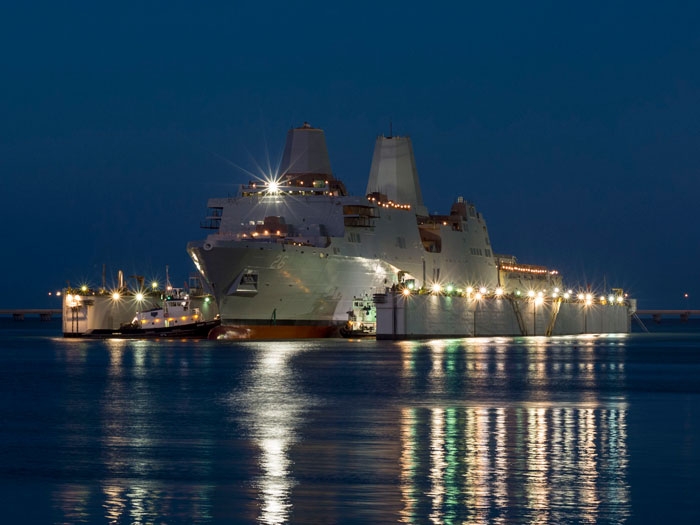 OCTOBER 30, 2014 —  Huntington Ingalls Industries (NYSE:HII) reports that its Ingalls Shipbuilding division has launched the company’s tenth amphibious transport dock, John P. Murtha (LPD 26). As has been done for all ships built at Ingalls’ Pascagoula, MS, shipyard over the past 40 years, shipbuilders moved LPD 26 on rail cars from land to the company’s floating dry dock on Oct. 19. Work took place last week to prepare the ship for today’s launch.

“This ship is tracking to be one of our best LPDs ever, and it is the most complete ship at launch to date,” said Ingalls Shipbuilding President Brian Cuccias. “We are incorporating learning from each ship to improve our performance in both cost and schedule. Our hot production line in LPD construction provides efficiencies in day-to-day work efforts and helps stabilize the program and the associated supplier base.”

The John P. Murtha is the tenth ship of the San Antonio (LPD 17) class which functionally replaces more than 41 ships across four ship classes. The launch marks a major milestone for the ship.

“It has been two and a half years since the last LPD 17 class ship was launched, and it is evident that HII is continuing to incorporate lessons learned from the earlier LPD 17 class ships,” said Capt. Darren Plath, LPD 17 class program manager within the Navy’s Program Executive Office, Ships. “The LPD 17 Class build plan, which was revised and fully implemented on LPD 25, organizes the individual work packages in the most logical sequence resulting in LPD 26’s successful entry into the water, en route to delivery in May 2016.”

“Our shipbuilders are becoming more and more proficient in building these ships, and they are committed to being the best at what they do,” said Kari Wilkinson, LPD 26 program manager. “We have a strong build plan in place, and we continue to implement construction improvements across the class to create an affordable platform. It is a blueprint we can follow in future ship classes as well.”

Ingalls has built and delivered nine ships in the San Antonio class of ships, with LPDs 26 and 27 remaining. LPD 27, named Portland, is scheduled to launch in 2016.

The 684-foot-long, 105-foot-wide San Antonio class ships are used to embark and land Marines, their equipment and supplies ashore via air cushion or conventional landing craft and amphibious assault vehicles, augmented by helicopters or vertical takeoff and landing aircraft

LPD 26 honors the life and accomplishment of the late U.S. Representative John Patrick Murtha, who served his country both as a Marine and in the halls of Congress. Murtha served in the Marine Corps for 37 years and saw service in the Korean War and in Vietnam, a tour that earned him the Bronze Star with Valor device, two Purple Hearts and the Vietnamese Cross of Gallantry. Murtha represented Pennsylvania’s 12th Congressional District from 1974 until his death in 2010.