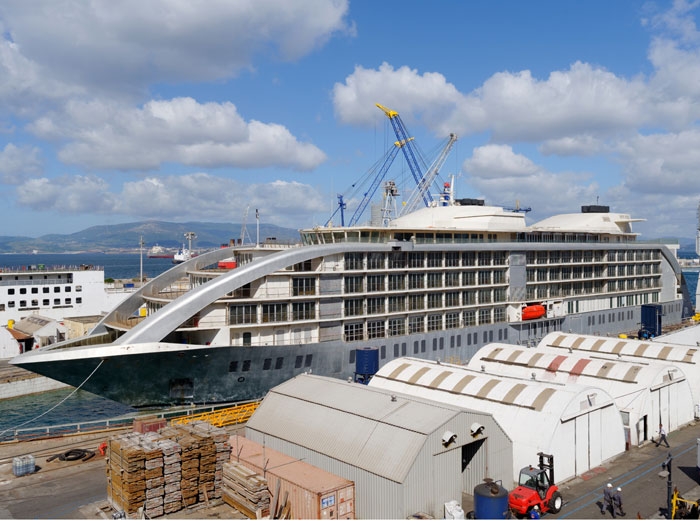 DECEMBER 17, 2013 — The 189-room five-star floating yacht hotel Sunborn Gibraltar is due to welcome its first guests in February 2014, after Gibraltar shipyard Gibdock drew on its cruise ship expertise to undertake hull blasting and coating work.

Despite its role as a tourist and business travel destination Gibraltar does not have a five-star hotel. The 142 m long, seven deck Sunborn Gibraltar resembles a sophisticated high-end cruise ship or mega yacht. However, while the vessel can move under its own power, it has been designed for sustained mooring alongside, and features its own heavy-duty mooring arms. Berthing space is being prepared alongside Gibraltar’s Ocean Village complex.

The vessel was built for the Finnish Sunborn group by Boustead in Malaysia and transported to Gibraltar onboard a heavylift ship, arriving in June this year. After unloading, Sunborn Gibraltar was moved to Gibdock for extensive hull blasting and coating work in the main dry dock.

“We were very pleased to be entrusted with what was a vital part of the project, as the vessel is likely to be moored in position for at least 15 years,” says John Taylor, Gibdock Operations Director. “Proper hull preparation and selection of the right coating system will be essential in protecting this asset and ensuring it remains safe and maintenance-free.”

“Marathon is a high solid epoxy product with exceptional abrasion resistance, delivering strength and durability,” says Mr. Taylor. “It is specifically designed to provide long term protection in harsh environments to submerged structures, and was a perfect match for the Sunborn Gibraltar.”

Sunborn Gibraltar spent 26 days at Gibdock, including alongside time. Gibdock grit blasted the hull to SA 2.5 standard with the coating process taking around 18 days in dry dock.

Richard Beards, Gibdock Managing Director, says: “Sunborn Gibraltar is a welcome addition to the local economy. It will be a great boost for Gibraltar plc to have a top end floating hotel.”

Currently at the final stages of being outfitted in Gibraltar, the floating hotel will offer a casino, spa and fitness center, cocktail lounges, fine dining restaurants and a ballroom. Conference and event space is available for up to 540 delegates. Some 90% of the 189 guest rooms offer outdoor space, while all have full-height glazing to capture Mediterranean views.

Mr. Beards says the project offers a  market reminder of Gibdock’s capabilities in the cruise sector, where recent customers include Thompson Cruises, Pullmantur and Saga. He says: “We are in negotiations with a number of cruise operators and expect the continuation in the flow of mainstream cruise ship repair and refit work to Gibraltar in 2014.”