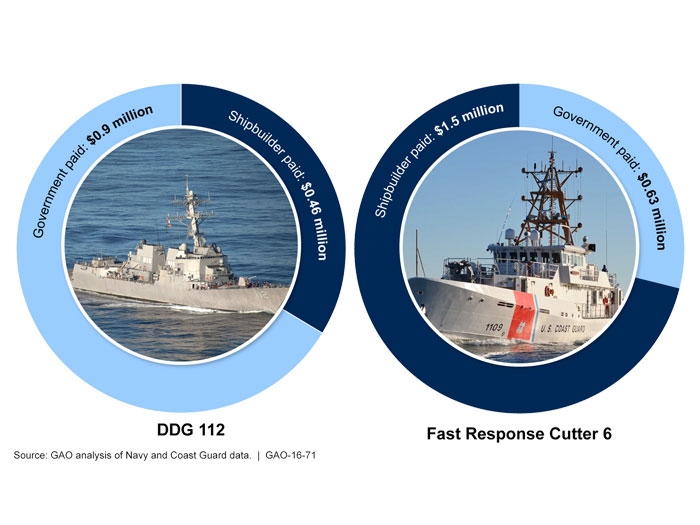 MARCH 4, 2016 — A GAO report says that the Navy should stop allowing shipbuilders to profit byr correcting defects for which they are responsible.

The report, “NAVY AND COAST GUARD SHIPBUILDING: Navy Should Reconsider Approach to Warranties for Correcting Construction Defects (GAO-16-71),” was made in response to a provision in the House report accompanying the FY 2015 National Defense Authorization Act.

It assesses the extent to which warranties and guarantees reduce the government’s exposure to additional costs and risks of poor quality and how the Navy and Coast Guard use acquisition regulations and guidance to implement warranties and guarantees.GAO reviewed the Navy’s and Coast Guard’s guaranty or warranty practices and policies and selected six case studies: four Navy ships—representing ships built in the last five years—and two vessels the Coast Guard most recently purchased

GAO says that for five of the six ships, guarantees did not help improve cost or quality outcomes.

Navy officials stated that this approach reduces the overall cost of purchasing ships; however, the Navy has no analysis that proves their point. In contrast, the warranty on another Coast Guard ship—the Fast Response Cutter (FRC)—improved cost and quality by requiring the shipbuilder to pay to repair defects. The Coast Guard paid upfront for the warranty, which amounted to 41 percent of the total defect correction costs.

“Although the Federal Acquisition Regulation (FAR) and the Department of Defense guidance instruct programs to, respectively, consider and document the use of a warranty, the use of warranties is not mandatory, and the Navy does not consider using them for ship contracts. In contrast, the Coast Guard’s FRC warranty, as well as that planned for another upcoming ship class, fosters quality performance by following the FAR warranty provisions,” says GAO.

The Navy may be missing opportunities for savings by not considering use of warranties, says the report, noting that without a clear objective and guidance for using a guaranty and for determining when a warranty is appropriate in shipbuilding, Navy contracting officers do not have the information they need to make informed decisions regarding which mechanism is in the best interest of the taxpayer.

DOD with the Navy should take steps to structure contracts so shipbuilders cannot earn profit for correcting defects for which they are responsible; determine whether a warranty is appropriate; and establish a guaranty objective and guidance. DOD partially concurred with the recommendations and it plans to complete a study by September 2016.