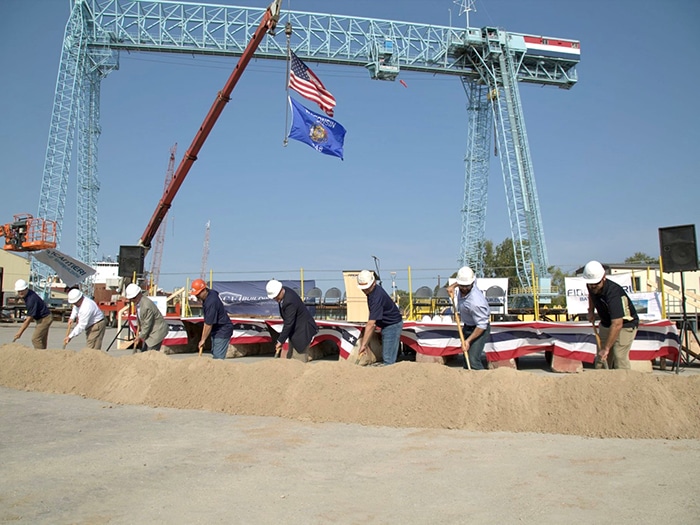 Sturgeon Bay, Wis.-based Fincantieri Bay Shipbuilding (FBS) has broken ground on a new 19,000-square-foot machine shop. Inside the 300 foot long building, shipbuilders will have access to two overhead cranes capable of lifting five and 30 tons, respectively. At the other end of the building will be offices, restrooms, a lunchroom and a tool room. The facility will primarily support the shipyard’s repair business.

Planning started for the new building nine months ago. The yard’s long-time construction partner, A.C.E. Building Services, is expected to complete the structure later next year. A.C.E. is no stranger to Fincantieri Bay, having built or renovated numerous buildings at the 63-acre shipyard over the previous 50 years.

“We are modernizing our infrastructure and replacing some very old buildings,” said Craig Perciavalle, vice president and general manager at FBS. “We are fortunate to have a great partner in A.C.E. [Building Services] to help us grow, but also to do so in a way that complements our surrounding community.

“Not only will our Bay Shipbuilding team have an improved place to work year-round, but we believe that the use of this facility will reduce dust and noise impacts for those who live nearby the shipyard, as work that was previously completed outside will be moved inside the new building.”

Perciavalle added that this project is the final piece to $70 million of investment since 2020, which will “allow FBS to better support the critical repair service we provide the Great Lakes fleet, keep expanding our commercial new construction business, and to a lesser extent, grow the government side of our business.”

Historically, the yard has supported sister-shipyard Fincantieri Marinette Marine as it builds warships for the Navy, but commercial repair and new construction remains the Sturgeon Bay shipyard’s top priority. Among its recent outstanding commercial deliveries have been the largest LNG bunkering barge ever built in the U.S. and the Great Lakes freighter M/V Mark W. Barker, the first ship of its kind to be built by a Great Lakes shipyard in more than 35 years.