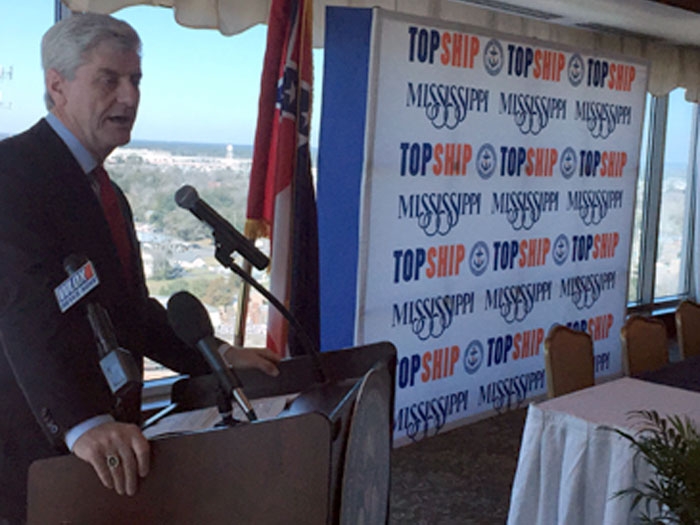 Mississippi Gov. Phil Bryant at the announcement of ECO locating shipbuilding operations at the Port of Gulfport

FEBRUARY 8, 2016—Edison Chouest Offshore (ECO), Galliano, LA, will be investing $68 million in the opening of a new shipyard in the Port of Gulfport. Mississippi Gov. Phil Bryant and officials from ECO announced the shipbuilding operations at the Port of Gulfport in Gulfport, MS, would create 1,000 full-time jobs.

Edison Chouest Offshore’s new Gulfport operations, TopShip, LLC, will be located at the Port of Gulfport’s new inland port on Seaway Road. The company will be operating at the former Huntington Ingalls Composite Facility, which was acquired by the Port in March 2015.

“Edison Chouest Offshore has been successfully producing quality vessels for decades, and through its business affiliate TopShip, 1,000 Mississippians on the Gulf Coast will have the opportunity to continue that tradition of quality,” Gov. Bryant said. “Mississippi has a proven track record in the shipbuilding industry, and we are proud to welcome TopShip to the state. I appreciate Gary Chouest and the entire Edison Chouest Offshore team for placing their confidence in our business climate and for their continued support of the Gulf Coast region and its residents. The state of Mississippi looks forward to many years partnership with this great company.”

“I would like to personally thank Governor Phil Bryant, MDA Executive Director Glenn McCullough, State Port Authority Executive Director Jonathan Daniels and their staffs for the warm welcome and assistance they have extended to TopShip. We are indeed excited about the opportunities to grow TopShip in a business friendly state, one where we can reach out into the community to recruit various skill sets, developing a quality workforce that will allow TopShip not only to compete locally, but also globally,” said Edison Chouest Offshore President and CEO Gary Chouest. “With the help of the state of Mississippi, we will modify our TopShip facility to become one of the safest and most efficient shipyards in the nation, building Chouest pride for our employees. The strategic location of TopShip will allow us to take advantage of the deepwater Port of Gulfport and their future expansion plans.  Born in Mississippi, I am back home.”

On Feb. 5, the Mississippi Legislature voted on an incentive package in support of the project. Lawmakers approved $11 million through the Mississippi Major Economic Impact Authority – $10 million in discretionary grants and $1 million for workforce training. The Port of Gulfport, through its restoration budget, is also providing $25 million in Katrina-CDBG funds for infrastructure improvements. The city of Gulfport and Harrison County are providing personal property tax abatements in support of the project.

“We salute Gov. Phil Bryant, Lt. Gov. Tate Reeves, Speaker Philip Gunn and the entire Mississippi Legislature for their support of this project, as well as the talented teams at the Port of Gulfport, the city of Gulfport, Harrison County, Harrison County Development Commission and Mississippi Power. They worked diligently with the MDA team to bring Edison Chouest Offshore to the Port of Gulfport, creating 1,000 exciting career opportunities for Mississippians in the Gulf Coast region,” said MDA Executive Director Glenn McCullough, Jr.  “Shipbuilding is a strategically important economic driver for the Gulf Coast and the entire state of Mississippi, and Edison Chouest Offshore’s decision to locate in Gulfport strengthens the state’s leadership in the industry. We look forward to Edison Chouest Offshore’s success in Mississippi for generations to come.”

“The governor’s change in vision has allowed the Port of Gulfport flexibility to further expand and acquire the Huntington Ingalls facility. This has allowed MDA to put together an incentive package, bringing TopShip, LLC to the Port and creating a significant number of jobs for coastal residents,” said Jonathan Daniels, Mississippi State Port Authority executive director and CEO. “Secondarily, TopShip’s operations on Seaway Road will link seamlessly with our modernized, deep-water draft facility, creating expanded cargo opportunities and leading to additional job creation.”