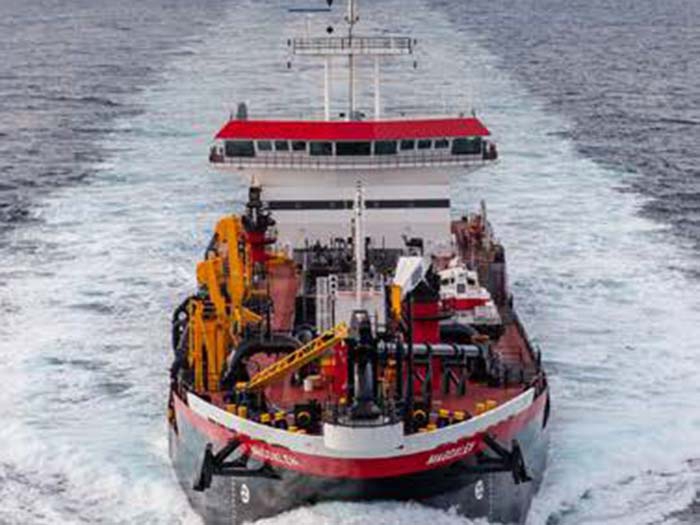 The 6,540 cu.m TSHD has been designed and engineered by Royal IHC of the Netherlands which supplied key components, such as the principal electrical and dredging systems. The vessel is equipped with IHC’s dynamic positioning/ dynamic tracking system, and economic pump control functionality, which will both further enhance its efficiency.

The dredge has been specifically designed for beach nourishment and capital dredging works and is highly automated.

Eastern took over construction of the vessel after it ran into problems at the shipyard originally contracted for the build, with the midbody of the ship and a number of other components being moved to Eastern in August 2015,

J. Stephen Chatry, Senior Vice President, Weeks Marine, called the the construction of the Magdalen “an exceptionally challenging and rewarding experience and said the vessel’s delivery had “everything to do with the partnership that was forged between Eastern, IHC and Weeks during the build.”

Joey D’Isernia, President of Eastern Shipbuilding Group, stated “This successful project was the result of a close working relationship between Weeks and ESG. The completion of a partially constructed dredge requires clear and open communication by both parties during the bidding phase and the execution phase. We thoroughly enjoyed working with Weeks on this project and look forward to seeing the Magdalen positively impact the Jones Act dredging market. With this delivery, ESG has firmly established itself as the go to shipyard for construction of large and sophisticated dredging vessels.”

M/V Magdalen has the following characteristics: