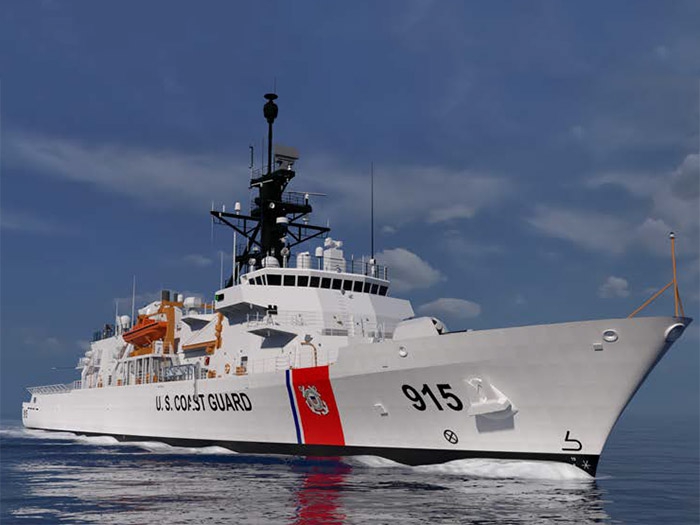 The Department of Homeland Security is easing the time deadlines in Eastern Shipbuilding’s Offshore Patrol Cutter contract, but only on the first four hulls. After that, it says, “The Coast Guard will immediately transition to a follow-on competitive contract for the remaining OPC program of record.”

The Coast Guard Acquisition Directorate says that following the DHS determination it is moving forward with an adjustment to the Offshore Patrol Cutter (OPC) detail design and construction contract with Eastern Shipbuilding Group (ESG) for up to the first four hulls. The Coast Guard will work with ESG to establish new cost and schedule targets under the contract and continue OPC production at ESG’s facilities in Panama City, Florida. Additionally, the Coast Guard will release a Request for Information to gauge industry interest in re-competing the remainder of the OPC program of record. This information will inform the acquisition strategy for the follow-on procurement.

Following is the text of the DHS announcement:

The Department of Homeland Security, after extensive analysis by the U.S. Coast Guard and further review by a Contract Adjustment Board chaired by the Department’s Deputy Under Secretary for Management, has granted limited extraordinary contract relief to Eastern Shipbuilding Group (ESG) for the Offshore Patrol Cutter (OPC) contract under the authority of Public Law (P.L.) 85-804.

ESG submitted a request in June 2019, for extraordinary contract relief after their shipbuilding facilities sustained significant damage resulting from Hurricane Michael, a Category 5 storm, in October 2018.

After review of the request for relief, Acting Secretary of Homeland Security Kevin K. McAleenan made the decision to grant extraordinary contract relief limited to the first four hulls on the basis that ESG’s performance on the OPC contract is vital to the national defense.

P.L. 85-804 was enacted in 1958 and extended to DHS through Presidential Executive Order in 2003. Under this law, an existing contract may be amended or modified when such actions are necessary to facilitate the national defense. The Coast Guard will immediately transition to a follow-on competitive contract for the remaining OPC program of record.

The OPC program remains one of the Department’s highest acquisition priorities. This decision will ensure critical capabilities for our national and homeland security, and delivery for service to the American public as expeditiously and responsibly as possible.