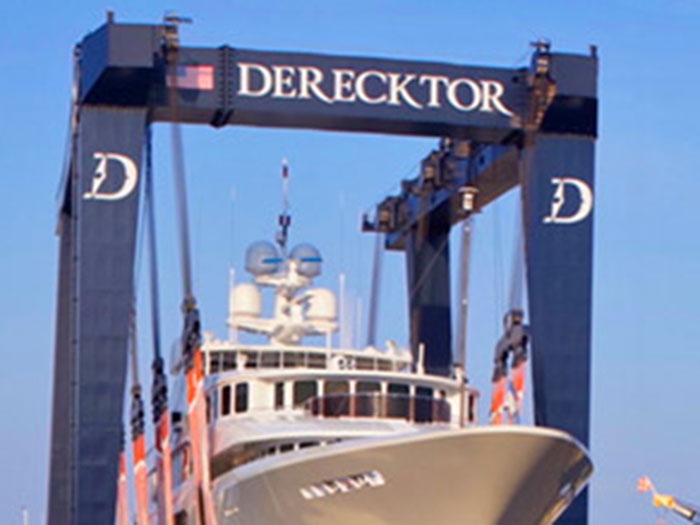 NOVEMBER 18, 2018 – Derecktor Shipyards has been selected by the St. Lucie Board of County Commissioners to create and operate a purpose-built megayacht repair and refit yard in Fort Pierce, FL. It will be the first of its kind in the United States.

“We are excited to be chosen by the County to create something special in Fort Pierce” said Paul Derecktor, President of Derecktor Holdings, Inc.. “The process was very thorough and our team did a great job throughout. I’d like to thank the County, the community and all our supporters in the industry for their involvement.”

The yard Derecktor will build is planned to service yachts of over 200 ft and 900 plus tons. Vessels of this size have no U.S. facility built specifically for them, presenting a major opportunity for Derecktor Fort Pierce, as the new yard will be known. Yard facilities will include a 1,400 ton mobile hoist (along with a 3,500 ton or larger dry dock) allowing the hauling and service of large sailing yachts, which currently are restricted almost exclusively to European shipyards due to lack of acceptable stateside facilities.

Once in full operation, Derecktor Fort Pierce will employ more than 200 people directly and hundreds more through subcontractors and suppliers. Derecktor has committed to a training program in cooperation with Indian River State College of Fort Pierce and intends to hire locally whenever possible. The company has also committed to relocating its headquarters to Fort Pierce.

Negotiations for a mutually beneficial contract are underway with the county with an eye to getting the new yard up and running as soon as possible, although complete build-out will take several years.

Paul Derecktor said the company is eager to get going. “We’re ready to start work on the site and bring boats in for dockside jobs as soon as an agreement is reached,” he commented. “We can’t wait to show the people of St. Lucie County and the megayacht world what Derecktor Fort Pierce can become.”