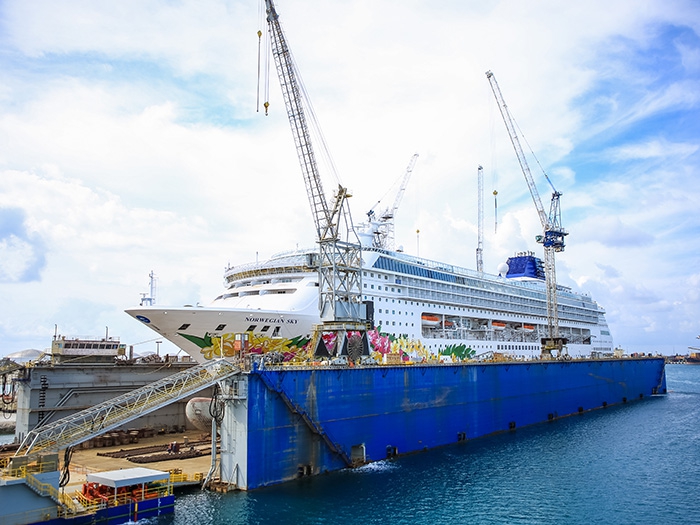 Norwegian Sky in dry dock at Grand Bahama Shipyard. The yard has three dry docks, a pier and wharf capable of docking vessels up to 82,500 tonnes and +300 m in length

MARCH 7, 2017 — Grand Bahama Shipyard Limited (GBSL) reports that it will complete work on 10 cruise vessels within the first quarter of 2017.

Work will include included significant propulsion and technical systems overhauls, hull treatment, accommodations and public spaces upgrades and the addition of onboard attraction facilities.

The first cruise ship to drydock at the shipyard in January 2017 was Grand Celebration, managed by Cruise Management International, which visited for a brief refit and upgrade to prior to its busy West Palm Beach to Freeport season.

By the end of the quarter Carnival Cruise Line will have drydocked four of the seven vessels it has scheduled to dry-dock in early 2017.

Carnival Ecstasy in January and Carnival Sensation, in February, each received the same major works which included complete hull treatment, major steel and pipe replacement throughout multiple vessel systems, as well as thruster and stabilizer overhauls. Other work on Sensation included an ABB/Carnival cyclo-converter co-op project supported by the shipyard, and the use of the yard’s Manitowoc 18000 to lift a new auxiliary diesel generator (ADG) module for installation while alongside at the yard’s North Beach Wharf.

Carnival Dream was also in dry dock at the yard to receive a new sea chest for the scrubbers along with thruster and stabilizer overhauls. Meantime, the yard supported the Carnival Hotel Refurbishment Team with interior structural modification works. Again, the Manitowoc 18000 was used to lift a new ADG module for installation while alongside.

Other Carnival ships set to visit the shipyard include the Breeze in April, Elation in August, and the Conquest in October.

Princess Cruise Line has booked three vessels for 2017. Late March, the shipyard will welcome Caribbean Princess in Dock 2 with a plan to paint the Princess logo “The Livery” on the bow of the vessel. Other future bookings include the Pacific Princess in May and Island Princess in November.

Royal Caribbean Cruise Line will drydock three vessels in 2017. April will see Grandeur of the Seas enter Dock 3 to be followed by Serenade of the Seas and Enchantment of the Seas, both booked in November 2017

Norwegian Cruise Lines docked four of the five ships planned for 2017 within the first quarter. In January, Norwegian’s Oceania Insignia visited Dock 1 for a quick inspection, to be followed by Norwegian Sky” on Dock 3 for work that included pools structures; replacement of bakery equipment; support to Rolls Royce on overhaul of CPP and replacement of side thrusters. The yard also constructed and maintained a complex scaffold for the Atrium upgrades.

Norwegian Pearl spent a significant amount of time in Dry Dock 3 in February for work that included complete hull treatment, the installation of new ballast water treatment system pipe lines and overhauls of thrusters, stabilizers and Azipods along with the replacement of the propeller blades.

Norwegian Jade and Seven Seas Mariner are both scheduled for April drydockings. That same month, Disney Cruise Lines Fantasy will arrive in Dock 2 for an extensive visit.

Holland America will bring three ships to the shipyard in the fourth quarter: Zuiderdam, Rotterdam and Nieuw Amsterdam.

Grand Bahamas Shipyard is known for delivering both cruise and commercial vessels on time, and often ahead of schedule.

“To meet the needs of our customers, we are dedicated to continual upgrades to our yard, and our services.” Says GBSL VP Sales and Marketing, Graham Couser. “Last year significant investments included facility upgrades and purchasing of new machinery and tooling adding to our workshops’ capabilities. We further expanded our facility with capital improvements to the North Beach Wharf. Work is in progress to extend our South Beach and East Beach areas.”