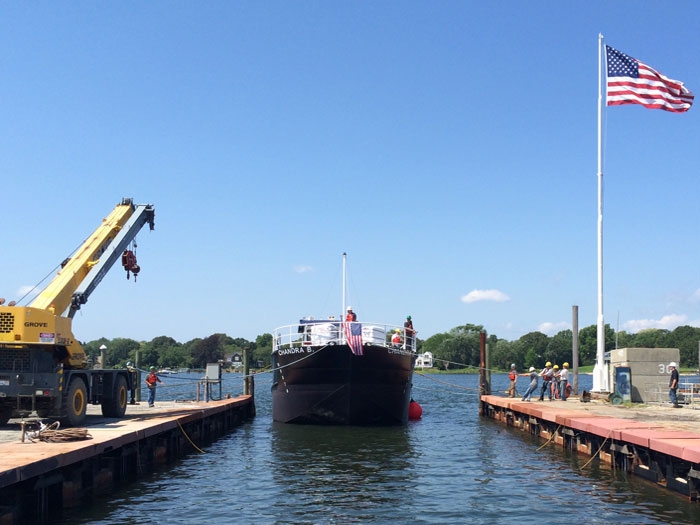 AUGUST 5, 2015—At a ceremony yesterday on a bright sunny day at its Warren, RI, shipyard, Blount Boats, Inc., launched the Chandra B, a new mini-tanker for American Petroleum & Transport, Inc., Miller Place, NY. The 79 ft by 23 ft, double-hull bunkering tanker will operate in New York Harbor and New Jersey supplying fuel to ferries, dinner boats, dredges, and other vessels.

The Chandra B, named after one of owner Stephen Bragoli’s daughters, was launched from Blount Boats’ newly refurbished production hall using its lift dock. The production hall now has two 7.5-ton capacity overhead cranes, partially funded through a Small Shipyard Grant from the U.S. Maritime Administration, says Blount Boats President Marcia Blount. Blount Boats also invested some $200,000 of its own money in repairing the building’s roof, as well as adding larger doors to accommodate larger beam vessels and skylight windows to enhance the natural lighting in the hall.Once the tanker was launched, it was moved from the lift dock and moored at Blount Boats’ pier for final outfitting of the electronics in the deck house.

Propulsion power for the tanker is supplied by two EPA Tier 3-compliant Cummins Model QSL9, six-cylinder diesel engines rated at 330 hp at 1,800 rev/min with ZF Model W325 marine hydraulic gears that will have 4.91:1 reduction ratio. The self-propelled Chandra B is equipped with a 50 hp Wesmar hydraulic bow thruster, providing it with enhanced maneuverability.

American Petroleum & Transport (APT) has had to retire all of its single-hull tankers because of OPA 90 regulations. Bragoli plans to sell both the 1966-built single-hull Patrick Sky and 1960-built single-hull Scotty Sky. The Scotty Sky was a Blount design launched as the L.G. LaDuca in 1960.

APT vessels crisscross New York Harbor delivering ultra low sulfur diesel to clients such as Circle Line, New York Water Taxi, Great Lakes Dredge & Dock, and Sterling Equipment, as well as for the auxiliary engines of larger ships. The Chandra B has cargo fuel tankage is designed to hold a capacity of 56,450 gallons.

Meanwhile, Blount Boats is completing what will be the first U.S.-flag offshore windfarm crew transfer vessel, due for delivery next year, and has signed a contract for a new sightseeing vessel for Chicago that will be designated as Hull #366.