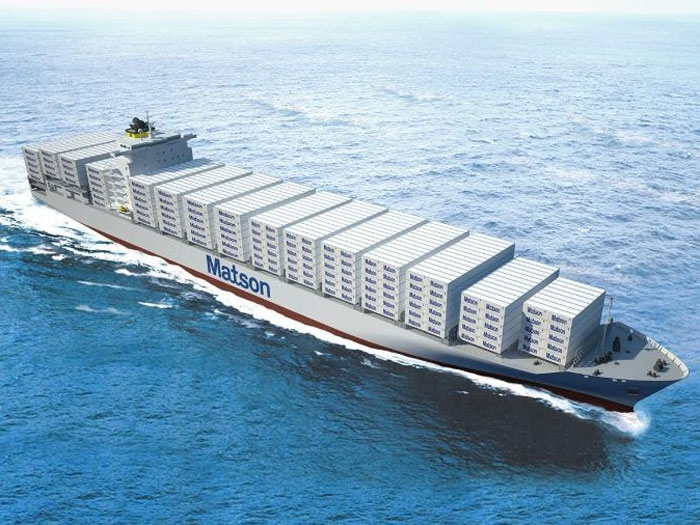 In 2013, Matson subsidiary Matson Navigation Company, Inc. signed a contract with Aker Philadelphia Shipyard Inc. (APSI) to build the two new ships for a price of $418 million for the pair (see earlier story). Since signing the contracts, engineering, planning and procurement work have been underway.

The shipbuilder is expected to deliver the ships in the third and fourth quarters of 2018.

The 850-foot long, 3,600 TEU vessels will be Matson's largest ships and the largest Jones Act containerships ever constructed. Despite their size, they are designed to accommodate future needs by being able to navigate safely into some of Hawaii's smaller ports.

They will also be faster, designed to operate at speeds in excess of 23 knots, helping ensure timely delivery of goods in Hawaii.

"These new ships are the future for Hawaii shipping and will bring a new level of efficiency and effectiveness to our service," said Matt Cox, president and CEO, Matson. "The substantial investment in new technology underscores Matson's long-term commitment to Hawaii and our desire to serve the islands in the best, most environmentally friendly way into the future."

The first ships to be delivered by Aker Philadelphia were four Jones Act containerships for Matson delivered between 2003 and 2006.

"We are excited to partner with Matson again and return to our construction roots building containerships," said Aker Philadelphia President and CEO Steinar Nerbovik. "It's an exciting time to be a shipbuilder as we embark on simultaneously building containerships and product tankers, fulfilling our commitments to customers and shareholders."