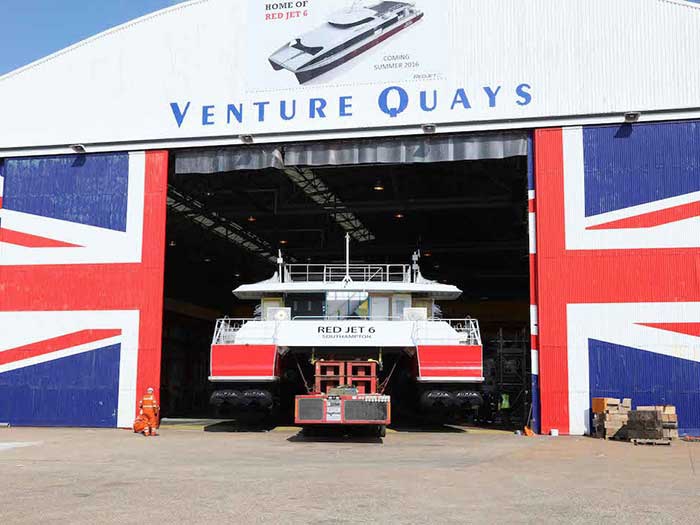 OCTOBER 12, 2016 — The largest fast passenger ferry order for a U.K. shipyard in over 25 years has been confirmed by MBNA Thames Clippers yesterday.

Two new 170-passenger, 35 m boats will be built at the Wight Shipyard Co on the Isle of Wight (formerly Shemara Refit LLP), and will join London’s growing river transport network in summer 2017.

Worth over £6.3 million (about $7.7 million), the order will see the creation of 75 new jobs across the Isle of Wight and London, and the involvement of over 100 businesses in the South of England as part of the delivery supply chain.

“In 2016 alone the MBNA Thames Clippers fleet will carry over four million commuters and visitors around London,” said Sean Collins, founder and CEO, MBNA Thames Clippers. “We are investing in an expanded fleet, built in the U.K., as well as exploring new options for piers to enhance London’s infrastructure and maximize the River Thames as a thoroughfare. Our commitment to enhancing the London river transport network is moving at a considerable pace.”

He added that in Wight Shipyard “we have found a new innovative yard with ambition who shares our vision for high quality, safe and environmentally efficient fast ferries. The complex nature of the tidal Thames means that it takes a specialist design and build team. We are thrilled to have found the right partners using One2three Naval Architects to design the vessels and a U.K. shipyard for the build, to make this important investment within the British Isles.”

Peter Morton CEO of Wight Shipyard Co. added: “Wight Shipyard (formally Shemara Refit LLP) is delighted to be awarded the contract to build two new 35 m high speed ferries for MBNA Thames Clippers. The company operates a large fleet of high profile ferries on the River Thames and this new order signifies that use of the river as a means of commuter transport is growing quickly.

“We are particularly pleased that these are the first high speed ferries to be built for the company in England as in the past all new MBNA Thames Clippers fast craft have been built in Australia. Having successfully completed the 40 meter Red Jet 6 for the Red Funnel Group we are confident that we will deliver high quality ferries for MBNA Thames Clippers and look forward to a long partnership with them.”