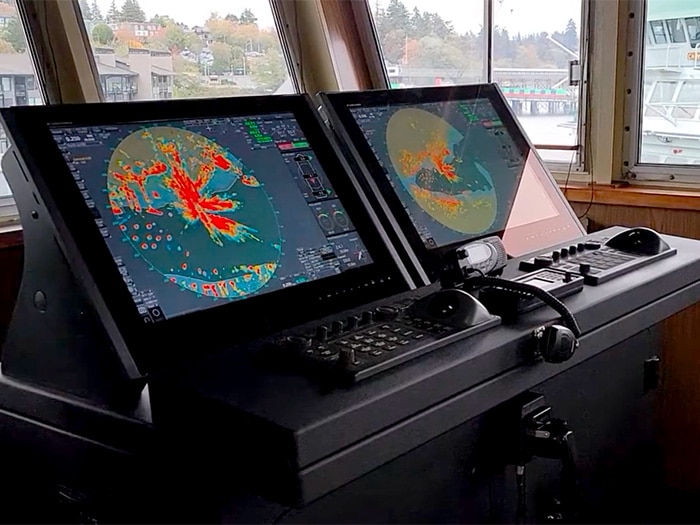 Built in 1979, Issaquah received a newly upgraded helm featuring four Furuno FAR3220NXTBB chart radars. These black box, solid-state chart radars provide enhanced target detection with a refined user interface and new, aerodynamic antennas, as well as a host of new and improved features. The user interface provides the operator with carefully organized tools, the status bar and Instant Access bar, that deliver straightforward, task-based operation. Issaquah’s operators can quickly perform tasks without having to navigate an intricate menu tree, and access to all of the necessary functions is immediately available. With two chart radars on each end of the double-ended ferry and enhanced side conning for added situational awareness, Issaquah is ready to carry on the WSF tradition of safe navigation for years to come.

Issaquah is the first WSF vessel with all-NXT solid-state commercial radars onboard, paired with the biggest and brightest monitors available, the MU270W. These widescreen monitors allow for 3-axis speed to be displayed directly on the radar display, a feature that WSF pilots really appreciate. The 3-axis speed displays important information for three different points of reference: longitudinal speed (ahead-astern), transverse speed (port-starboard) at the stern, and transverse speed (port-starboard) from a user-determined reference point. this information is critical in advising operators of the ship’s movement during challenging conditions, such as berthing.

“Having easy-to-see rate-of-turn and 3-axis speed at the conning position is a game changer,” says WSF’s Captain Joel Michelson. “3-axis speed gives me accurate fore-aft speed, and also transverse speed and stern speed. On other vessels, I have speed over ground, but I could be drifting and not actually know if I’m making forward progress towards the landing. With 3-axis speed, I know exactly how the vessel is behaving, especially in heavy current and strong wind. I also like the larger displays, which are easy to see peripherally, but are also out of the path of view through the windows.”

Dual SC130 satellite compasses provide redundant heading and position, ensuring accurate heading from one end to the other. Issaquah is the first in the WSF fleet with completely redundant heading with automatic handover, ensuring continued data distribution if either antenna were to malfunction. If one compass were to fail, the other will take over automatically. With dual SC130 Satellite Compasses, the Issaquah has no need for a gyrocompass or the costly maintenance expenses they require.

“One of the most important things I noted about Issaquah’s installation was the fully redundant heading inputs to the navigation suite,” said Captain Michelson. “If a heading sensor antenna were to be lost at either end, the sensor from the opposite end seamlessly takes over, and all equipment continues to operate normally. In the past, loss of heading meant operating the Radars in heads-up only mode and doing without AIS or ARPA until the heading sensor was fixed. But on Issaquah, I’ll be momentarily alerted of the failure and still be able to navigate normally.”

Dual RD50 remote data displays at each end take advantage of the fast heading, rate-of-turn (RoT), and 3-axis speed information. They are fully adjustable thanks to custom RAM mounts that keep them at a perfect viewing angle for the operator without blocking the view outside the window.