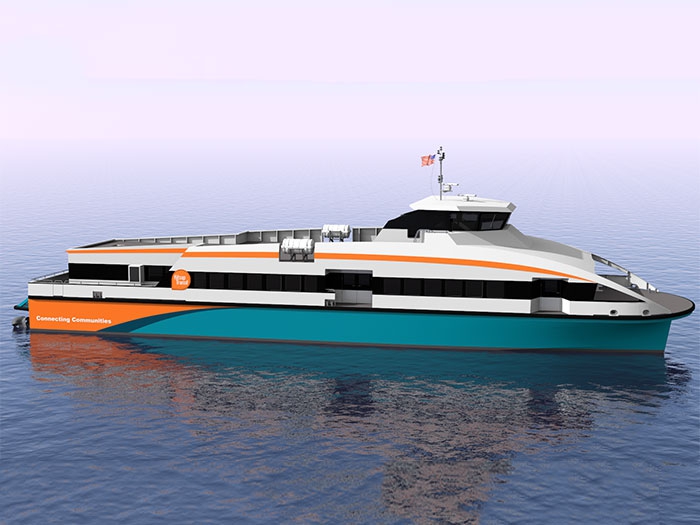 The new passenger-only ferries will support Kitsap’s plans to further expand its Bremerton – Kingston service and add service to Southworth in 2020.

The two 140 ft  x 37 ft  x 12 ft aluminum high-speed catamarans will be built to USCG Subchapter K regulations and will each carry 250 passengers and 26 bicycles, a must for Seattle commuters.

The catamarans were designed by BMT Nigel Gee to optimize for loading and unloading of passengers as well as in-route time. The vessels can load passengers and bikes through a two-station loading area on the sides, or alternatively through divided passenger/bike lanes from the bow. The vessels will have a maximum speed of 37 knots and cruise speed of 35 knots at full load.

The ferries will be powered by two MTU Tier 4 16V400M65L main engines each putting out 3,435 hp at 1,800 rev/min, through ZF 9050 gears, turning Kamewa S71-4 waterjets, reaching 35 knots at full load. The engines will be fitted with a selective catalytic reduction (SCR) exhaust aftertreatment systems.

Particular attention has been paid to passenger comfort. An air conditioning system will keep the passenger cabin cool in the summer and warm in the winter. Cabin noise will be reduced by minimizing the overlap of the passenger and engine compartments and utilizing the latest USCG approved noise attenuation materials.

“We really appreciate the opportunity to work with Kitsap Transit on the development and implementation of this new transportation system networking the Olympic Peninsula with Seattle,” said Gavin Higgins, NBBB’s CEO. “Using Puget Sound as a water highway to reduce the Seattle metro traffic congestion and expand the housing market with very reasonable travel times is a great model for the other counties around Seattle to follow.”

Earlier this year, Kitsap Transit purchased The Finest, a 350-passenger high-speed catamaran from New York Waterways and shipped it to Puget Sound. Following a refurbishment at NBBB, Finest made its inaugural run between Kingston and downtown Seattle the day after Thanksgiving on the busiest shopping day of the year. The new service has met with great reviews opening up a completely new marine highway between downtown Seattle and Kingston.

NBBB has built over 50 high-speed catamarans. In addition to the two Kitsap ferries, NBBB is building a 105 ft hybrid escort tug for Baydelta Maritime and four 105 ft escort tugs for Foss Maritime.