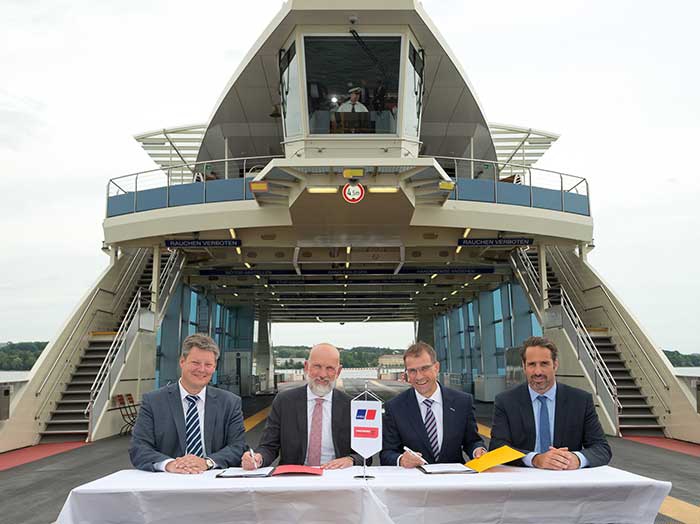 JUNE 12, 2017 — From 2019, Rolls-Royce Power Systems and Stadtwerke Konstanz, the local public utility in Konstanz, Germany, are to begin testing the marine propulsion technology of the future — in the form of an MTU gas engine — on Lake Constance (Bodensee)

The public utility’s new car ferry is to be equipped with twin 8-cylinder Series 4000 gas engines from MTU, each delivering 746 kW and operating on LNG. It will be the first inland waterway passenger vessel in Europe to be propelled by straightforward high-speed gas engines.

Representatives from Rolls-Royce Power Systems and the Konstanz public utility signed the cooperation agreement on Friday. It covers a two-year trial of the propulsion system in the ferry under continuous service conditions with both partners collating data.

“Gas engines for mobile applications form a core component of our Green and Hightech initiative,” said Andreas Schell, CEO of Rolls-Royce Power Systems. “This flagship project is being realized on our local ferry service between the towns of Meersburg and Konstanz, which allows us to demonstrate the effectiveness of our new technology and set an international trend right on our doorstep. We firmly believe that in shipping, gas engines are set to play a pivotal role as a back-up to well-proven diesel engine technology.”

“The first ships were steam-powered, then diesel engines took over for roughly a century, but now gas engines are to determine the course of marine propulsion in the future,” said Norbert Reuter, head of the Konstanz public utility. “The shuttle service we provide between Konstanz and Meersburg saves some 80 million kilometers of road travel each year, and with this new ferry we are making our service even more ecologically sound.”

A gas engine emits no soot, no sulfur oxides, 90% fewer nitric oxides and 10% fewer greenhouse gases than a diesel engine without exhaust gas aftertreatment. The gas engine can comply with the IMO III emissions standard that came into force last year, without the need for additional exhaust aftertreatment, and is equal to the diesel engine in terms of performance and dynamics.

“This cooperation agreement with Rolls-Royce Power Systems marks the continuation of our partnership which now spans over 30 years. During this time we have shared our commitment to reducing emissions harmful to the environment and to strengthening Lake Constance as a region,” said Mr. Reuter. “Thanks to this partnership, we are assuming a pioneering role in the region of Lake Constance and beyond, since no passenger vessel on the inland waterways of Europe has yet achieved the certification we are striving for.”

Rolls-Royce Power Systems first presented its MTU-brand gas engines for marine propulsion in July 2016, and its prototype, a 16-cylinder Series 4000 unit, has now successfully completed over 4,000 operating hours on the test stand. MTU’s mobile gas engines for the future are attracting considerable interest worldwide and the first pre-series 4000 units for marine propulsion are scheduled for delivery at the end of 2017. They will be dispatched to the Strategic Marine shipyard in Vietnam where they will be installed in catamarans for Netherlands operator Doeksen.

Stadtwerke Konstanz Konstanz is to be supplied with the first 8-cylinder version of this engine.