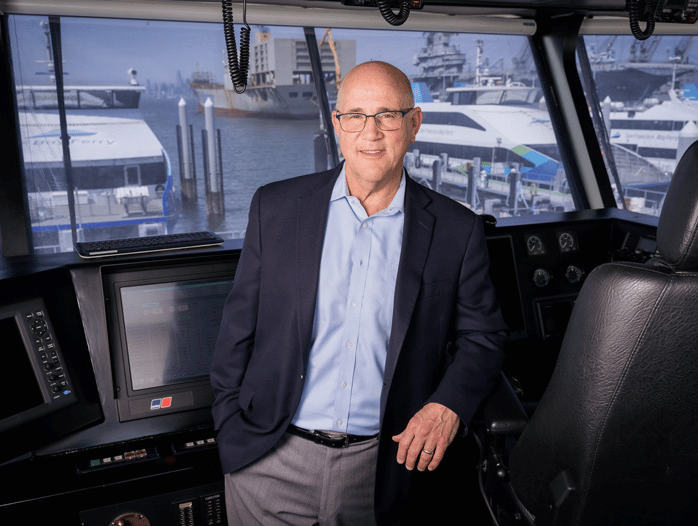 Jim Wunderman, president and CEO of the Bay Area Council.

This year, the event plans to focus on decarbonization and alternative fuel technologies, while also bringing new and exciting ferry project overviews in front of decision makers, ferry operators, key suppliers, naval architects, and others at the Grand Hyatt San Francisco. Day 2 will wrap up with an exclusive tour of the much-awaited Sea Change ferry, the 70-foot catamaran ferry, equipped with a hydrogen fuel cell system.

Opening the event as keynote speaker will be Jim Wunderman, president and CEO of the Bay Area Council, a CEO-led public policy and advocacy organization formed in 1945 that works to shape the future of the Bay Area and keep it as the most innovative, globally competitive, and sustainable region in the world.

“The Bay Area Council led the charge to create the Water Emergency Transportation Authority, which operates SF Bay Ferry, with the dual goals of creating a world class water transportation system for the public, while assuring that our region is better positioned to respond to a major emergency, including a large magnitude earthquake,” says Wunderman. “We’ve made huge progress expanding the system and believe our future will feature a new era of zero emission vessels that will attract ever more passengers. I’m proud that Gov. Gavin Newsom appointed me to serve as chairman of WETA. Both the Bay Area Council and WETA are excited that Marine Log’s FERRIES 2022 will take place in San Francisco.”

Since becoming CEO in 2004, Wunderman has dramatically expanded and deepened the Council’s reach and influence throughout the Bay Area, Silicon Valley, the U.S. and the world.

As the leading steward of the Bay Area, the council has grown under Wunderman’s tenure to include more than 325 member companies across a wide range of industries. He has positioned the council as a leading voice for business and the economy on a wide range of issues, including transportation, workforce development, early education and more. He opened the council’s office in Sacramento, where he regularly appears on the list of the state’s Top 100 political movers and shakers.

Governors, mayors, legislators, foreign leaders and top business executives regularly seek his input and guidance on key issues and he makes regular appearances and provides commentary across a wide range of news media.

Behind Wunderman’s leadership, the council has spearheaded and partnered in numerous ballot measure campaigns that have secured tens of billions of dollars for transportation, climate resilience, and more.

Recognizing the Bay Area’s emergence on the world stage as an economic force through its leadership in technology and innovation, Wunderman steered the council to play a greater role on the international stage. In particular, he launched an initiative in China that has grown to four Bay Area Council offices, which in turn led to the creation of a public-private partnership with the state of California to reopen its trade and investment office in China, operated by the Bay Area Council.

He has served on numerous boards and commissions. He currently serves as a gubernatorial appointee as Chair of the Water Emergency Transportation Authority (WETA, which develops and operates the region’s ferry system), the Blue Ribbon Transit Recovery Task Force, Too Small to Fail Advisory Council, California Foundation on the Environment and the Economy, California Stewardship Network, California-China Trade and Investment Advisory Board, Fisher Center for Real Estate & Urban Economics, Sierra Energy, and TMG Partners. He sits on a host of other boards as well.

Prior to his work at the Bay Area Council, Wunderman’s career from 1984 to 2004 was split between both the private and public sectors. He served as Chief of Staff to San Francisco Mayor Frank M. Jordan from 1992-95, following five years of work for Mayor Dianne Feinstein. From 1997 to 2004, he served as senior vice president for external affairs at Providian Financial Corporation.

He is a graduate of San Francisco State University, majoring in political science. He also holds an Associate’s degree in business administration from Kingsborough College, City University of New York. He is married to Kristina Wunderman, has five children and resides in Contra Costa County.

While it is expected that many more will sign on, FERRIES 2022 already has nearly 30 sponsors.

Registration for the event is open.