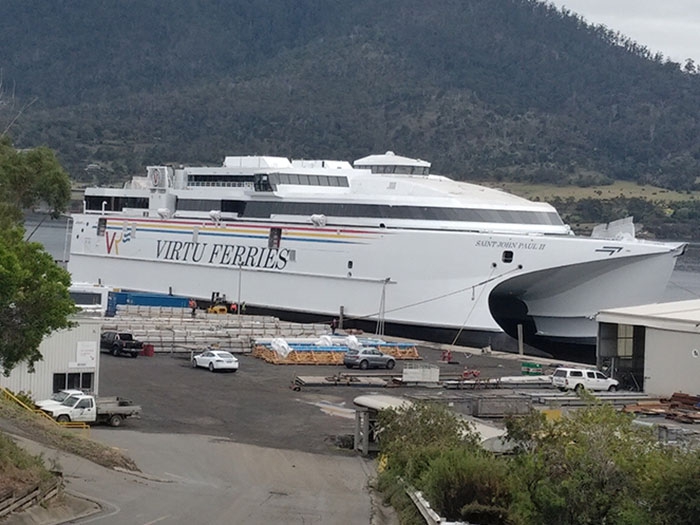 DECEMBER 24, 2018 — Australian shipbuilder Incat Tasmania recently launched a 110 m vehicle / passenger ferry for Virtu Ferries at its Hobart, Tasmania, shipyard. The ship will commence sea trials in mid-January prior to delivery for service between Malta and Sicily.

This new 110 m wave piercing catamaran will be the 15th fast ferry Virtu has acquired and the largest high speed catamaran in the Mediterranean. With a service speed up to 38 knots it will complete the crossing from Malta to Sicily, berth to berth, in around 90 minutes.

Work commenced on HSC Saint John Paul II in 2017, and together with other export orders has been a catalyst for a significant increase in workforce numbers at Incat over the past two years.

Robert Clifford, Chairman of Incat, said, “Virtu Ferries is amongst the oldest, most respected and most discerning fast ferry operators in the world, operating a variety of high speed ship services throughout the Mediterranean and Adriatic. We are delighted that this Incat vessel will operate their year-round lifeline service between the islands of Malta and Sicily. Virtu Ferries were looking for increased reliability, sea keeping, passenger comfort, capacity and economy with less operational downtime, and it is a pleasure to welcome them to the Incat family of shipowners”.

For Virtu Ferries this new vessel provides a significant increase in capacity, the 490 truck lane meters offering 43% more truck capacity, with 15% more passenger capacity and 7% more car capacity than itsprevious craft. HSC Saint John Paul II interior incorporates VIP, Business and Economy class areas for the 924 passengers and crew. The ship is fitted with a total of 1,120 seats, including outdoor seating on the aft deck.

The design was modeled by Revolution Design and Seaspeed Consulting and then extensively tank tested and optimized at QinetiQ, in the U.K.

The ferry has been built to DNV GL rules and complies with IMO High Speed Craft HSC 2000, the Malta Flag statutory requirements and Italian Port State requirements. As with all other Virtu vessels the new Incat built ferry will fly the Malta flag.